Last night I attended a double feature of Frankenstein and The Bride of Frankenstein on the big screen. It was a special one day only event put on by Turner Classic Movies. Very cool. I’d seen both movies before, but never one right after the other, and I hadn’t realized how very different they are from each other. Yes, you have Boris Karloff as the monster in both, Colin Clive as Henry Frankenstein in both. Both were directed by James Whale. Both were from Universal Pictures. And in my opinion, both are great works of art. However, the first movie plays as a tragedy; very atmospheric and moody, and the monster is not really a monster at all. He’s misunderstood and trying to figure out this world he’s been brought to life in. It’s most of the rest of the characters in the movie that are the real monsters. 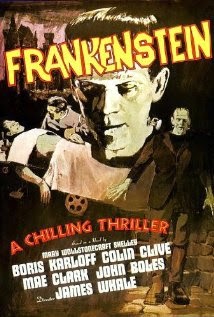 To go a little off-topic – one thing that got to me was that as the parent of a son with autism, I couldn’t help but see autistic characteristics shared by the monster – his trouble with communication, his way of perceiving the world, his “differentness.” Were people with autism treated in a similar way back then? I shudder to think of it. Anyway...

In contrast, The Bride of Frankenstein is played much more as comedy. Many supporting characters are cartoonish and played for laughs. Karloff’s monster in this one is also more thuggish, especially in the second half of the movie. His monsterish qualities are emphasized. The character Dr. Pretorius is such a cartoonish villain, and the experiments in the jars that he shows to Dr. Frankenstein – just plain silly. That being said, it’s also a great movie. There are so many classic/iconic scenes in this one. There’s the beautiful sequence where the monster comes to the house of a blind man and befriends him (wonderfully parodied in Young Frankenstein) and Elsa Lanchester’s Bride is great, too, although the bride is only in the last handful of minutes of the movie. Having watched Metropolis not too long ago, you can certainly see that movie’s influence on her character.

I wished that there were more people in the theater. It was about a third full, which isn’t bad for a Wednesday night, but since this was only showing this one day in selected theaters around the country, you’d think more people would want to experience these classics on the big screen. Ah well...