I first saw Jane Yolen at a sci-fi/fantasy convention in Minnesota. She held a panel where she read bedtime stories to us (all of us adults) and served milk and cookies. Many in the audience were dressed in their pajamas. She's written hundreds of books. And awards...you want awards? Well, let her website do the talking: "Jane Yolen's books and stories have won the Caldecott Medal, two Nebula Awards, two Christopher Medals, the World Fantast Awards, three Mythopoeic Fantasy Awards, the Golden Kite Award, the Jewish Book Award, the World Fantasy Association’s Lifetime Achievement Award, and the Association of Jewish Libraries Award among many others." I'm probably not the first person to respond to that with "Holy cow!" Anyway, it's quite the honor to have Jane answer my five questions. 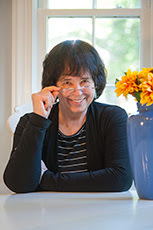 Well, as I write a bunch of things at a time, and publish several, let me talk about my fall books:

The Hostage Prince, written with my son Adam Stemple, the first book of a middle grade fantasy trilogy, Part 1 of the Seelie Wars. A prince who has been at the Unseelie Court as their hostage since he was 7, a midwife's apprentice, both meet in the dungeons and are trying to escape back to the prince's court. There are trolls, boggarts, carnivorous  mermen, Berserker Border Lords, and. . .

Too many to name just one, but among my favorites (today) are:

Starting a new book.
Finishing an old book.
Finding the story.
Working in my jammies.

Getting letters from my readers, such as "I was going to write to Enid Blyton or Mark Twain but I hear they are dead, so am writing to you."  And, "Your stories will live forever. I hope you live to 99 or 100, but who cares."

Show up. - David Stemple
Don't be beguiled by your own facility. - Frances Keene
Trust your readers. - Linda Zuckerman
And I always tell my writing students – BIC - Butt in Chair!!!