Sujata Massey has won the Agatha and the Macavity Award for her previous mystery novels (all set in Japan) and has been nominated for many other awards, such as the Edgar, the Anthony, and the Mary Higgins Clark Award. But today marks the debut of her first historical novel, The Sleeping Dictionary - this one set in Calcutta. It's already getting lots of great buzz, and it sounds like a must have for me. So please welcome Sujata to my blog, and much thanks to her for answering my five questions! 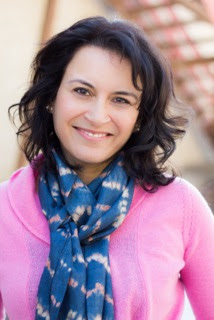 The Sleeping Dictionary is my first historical novel (after having written ten mysteries). The story is set in 1930-47 India and describes the late British Raj period as seen through the eyes of a young peasant girl who grows to maturity and becomes a secret freedom fighter for the Indian independence movement. It's historical espionage, a mother-daughter tale, and a love story as well. 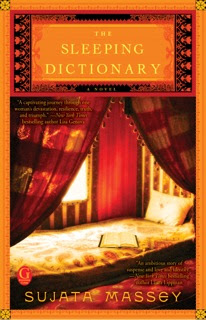 My favorite author and book is a statement that changes as I continue to read. Snow Flower and the Secret Fan by Lisa See is a wonderful story about two female friends in historic China. I love the way that it blends emotion with national history and illuminates little known cultural aspects, such as foot binding and the secret handwriting Chinese women once used to write to each other.

The best part of writing for me is knowing that I've come up with a fresh idea that hasn't been done – which is a lot easier than you might think.  Basically, you concoct the plot and characters and setting for a book you'd really like to read, that somehow does not exist on your bookshelf.  In my case, I realized that although there were a number of insightful novels about colonialism in India, I couldn't find one written about an Indian woman – let alone a female servant. And there are very few books about Indian servants who aren't content to quietly stay in service, but instead make something great happen for themselves...even if it means deceiving others about their origins. The ancient Indian idea of caste – being born into a particular class and profession, that should not be changed – makes many in India there doubt that social mobility is possible, even now. I wanted to write a book challenging that idea.

I've been a fiction writer since 1992. It's a very long process for me to write a book because of all the rewriting. I've had to shed gigantic sections of books – even today – because it's been pointed out to by agents and editors that the book is too long and needs trimming for the storyline to remain suspenseful.

This absolutely is the hardest part of the job for me, because I think expansively and tend to write much longer books than are typically publishable. A first draft of a novel for me might clock in at 700 or 800 pages. Right now I'm experimenting with writing a new novel that goes from the present in one chapter to events perhaps ten years in the past in the next chapter, to try to see if I can share the story this way without so much over-writing. A talented writer who skillfully uses this technique is Khaled Hosseini (The Kite Runner and two other excellent novels set in Afghanistan).

The best writing advice I received was from a creative writing professor I studied with as a college undergraduate. He is John Barth (The Floating Opera and many other modern classics). Mr. Barth said I shouldn't try to get into a Master of Fine Arts program for creative writing. He suggested that I take the journalism job that was being offered to me after graduation, get some good life experiences, and then consider writing fiction. This worked well for me, because I wound up living in Japan for two years, good fodder for ten Rei Shimura mystery novels.