Dan Was My Friend

When I worked in Yellowstone National Park back in the first half of the 1990s, I had a friend named Dan Cleland. I learned that he recently died, and I couldn't find anything on the internet about him, other than a listing in the Social Security Death Index, so I thought I'd tell you a little bit about this really interesting guy.

We called him Uncle Dan. Not sure why. He was older than most of us - in his early 50s - and he worked in the Old Faithful Lodge cafeteria, usually slinging burgers. He was small, skinny. Black hair, slicked back. And his laugh...my God, his laugh. If you heard it, you would never forget it. And it wasn't something that just came from his throat and lungs. His body entered into the laughing process, too. If you got him going, he would start this wheezing sorta sound, unable to speak, and he'd raise his arm, giving a thumbs up, the arm waving up and down, thumbs up, thumbs up, thumbs up!

We lived in cabins - there were dorms, too, but I lived in a cabin along the Firehole River behind the Lodge. Most of the employee cabins were located behind the Snow Lodge. Those cabins are gone now, the old Snow Lodge, too. But anyway, Dan lived in one of the cabins behind the Snow Lodge. I was introduced to him because he was a writer, and I was a writer, too. He read his stories to those who'd listen - Uncle Dan's Story Time, we called it. They were damn good stories, too; intense, often dark, and he read them dramatically, a seasoned storyteller. He read some of my stuff - one of my novels I'd written - and he really liked it and encouraged me to do something with it. So we became friends through our writing. 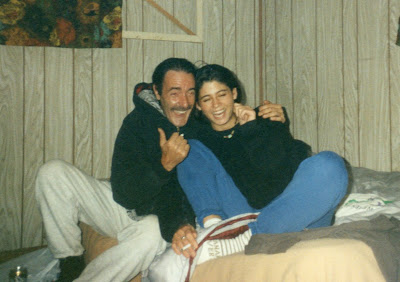 One thing about the cabins is that some of the employees had tree stumps outside of their doors to sit on. They were movable, not rooted to the ground. Whenever you'd visit Dan, and he was in the mood for company, he'd say, "Pull up a stump!" and offer you a beer. Busch, if I recall correctly. If he was out of beer, he'd pat down his shirt, smile, and say, "Uh, hey - you mind buying?" But he gave more than his share. 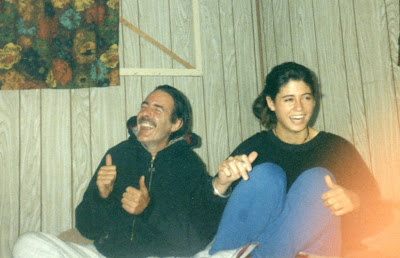 Dan was a character. He graduated from high school at a very early age - fourteen or fifteen, if I remember correctly, and then went on to college right afterwards. He lived in San Francisco during the flower child revolution. He loved the Grateful Dead, talked about once having had a one night stand with Janis Joplin, attending a recording session with The Fugs, taking a piss next to Jimi Hendrix. He said that he once spent two years in solitary confinement in Taiwan for smuggling drugs in the 70s. That's when he read one of his favorite novels, Thomas Pynchon's Gravity's Rainbow. His other all-time favorite was Malcolm Lowry's Under the Volcano. I took his suggestions and read them, too.

Dan was a drinker, a smoker - and not just cigarettes. He had a word processor (this was a while before laptops) that he'd occasionally write on, but mostly used the hard plastic cover of it to sort his weed. After dark, after a number of beers, he'd often get up and say, "Excuse me a moment - I need to go water the flowers." He'd exit the cabin, and a moment later you'd hear the sound of pee hitting the dirt.

Dan once wrote a novel, and then lost it in a fire.

Dan was my friend. He was a good listener, too. You felt comfortable talking to him. He had a bawdy sense of humor. Once, after not seeing him for a couple years (I had skipped working in Yellowstone the winter of '93 and the whole of '94, living in Bozeman, then coming back to the park for the summer of '95) I was in the Old Faithful Inn, and then heard a gruff voice call out, "Hey! Asshole!" I turned around and there was Dan, grinning, his black hair now with a little bit of salt, a goatee hanging off his chin.

He was an interesting character, the kind of person you don't meet a lot of in this world. He probably rubbed a lot of people the wrong way - I don't know...

But Dan was my friend.

So tonight, I'm going to pull up a stump, raise a glass to him, and listen to a little Janis.

Email ThisBlogThis!Share to TwitterShare to FacebookShare to Pinterest
Labels: Yellowstone