Here, the Johnsons are still hanging around the Pike's Peak region of Colorado, taking in the spectacular views, the alpine air, the wildlife. It's the end of June, 1937, and I bet the air up there felt great! 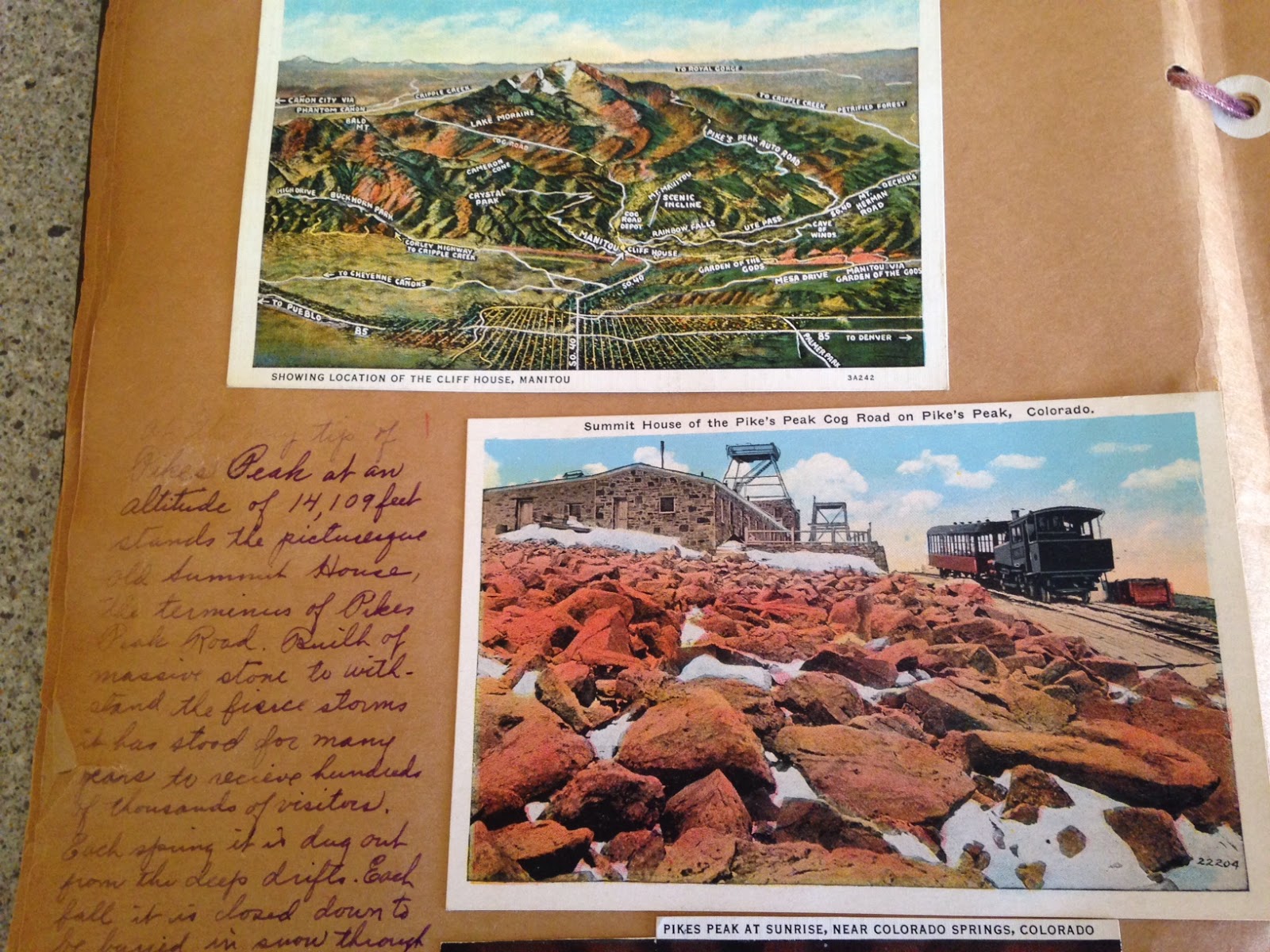 Our scapbooker writes, "At the very tip of Pike's Peak at an altitude of 14,109 feet stands the picturesque old Summit House, the terminus of Pike's Peak Road. Built of massive stone to withstand the fierce storms it has stood for many years to receive hundreds of thousands of visitors. Each spring it is dug out from the deep drifts. Each fall it is closed down to be buried in snow through the winter."

On the bottom half of that same page is a postcard titled Pike's Peak at Sunrise, near Colorado Springs, Colorado. The comic included says (girl) 'Oh, Daddy, there's the famous Cog-Railway car. I wish we had come up on it. You must be tired from that drive. (Dad) 'Not at all.' Again, I'm not sure of the name of the comic, so if you know, let me know!

On the next page is a receipt for the copy of the Pike's Peak Daily News that I mentioned in before. 25-cents. Perhaps the pages are a little out of order in the scrapbook, since they had been at Pike's Peak a few pages back, and are there again. Or maybe they were in the area a few days, and revisited.

The Johnson's have reached the Continental Divide. The cartoon below says, (girl) ' Oh, Dad, is it true that we're actually at the Continental Divide?' (Dad) 'Yes, Chubbins, we're at the roof of the continent. On one side, water flows to the Pacific Ocean, and on the other to the Atlantic.' 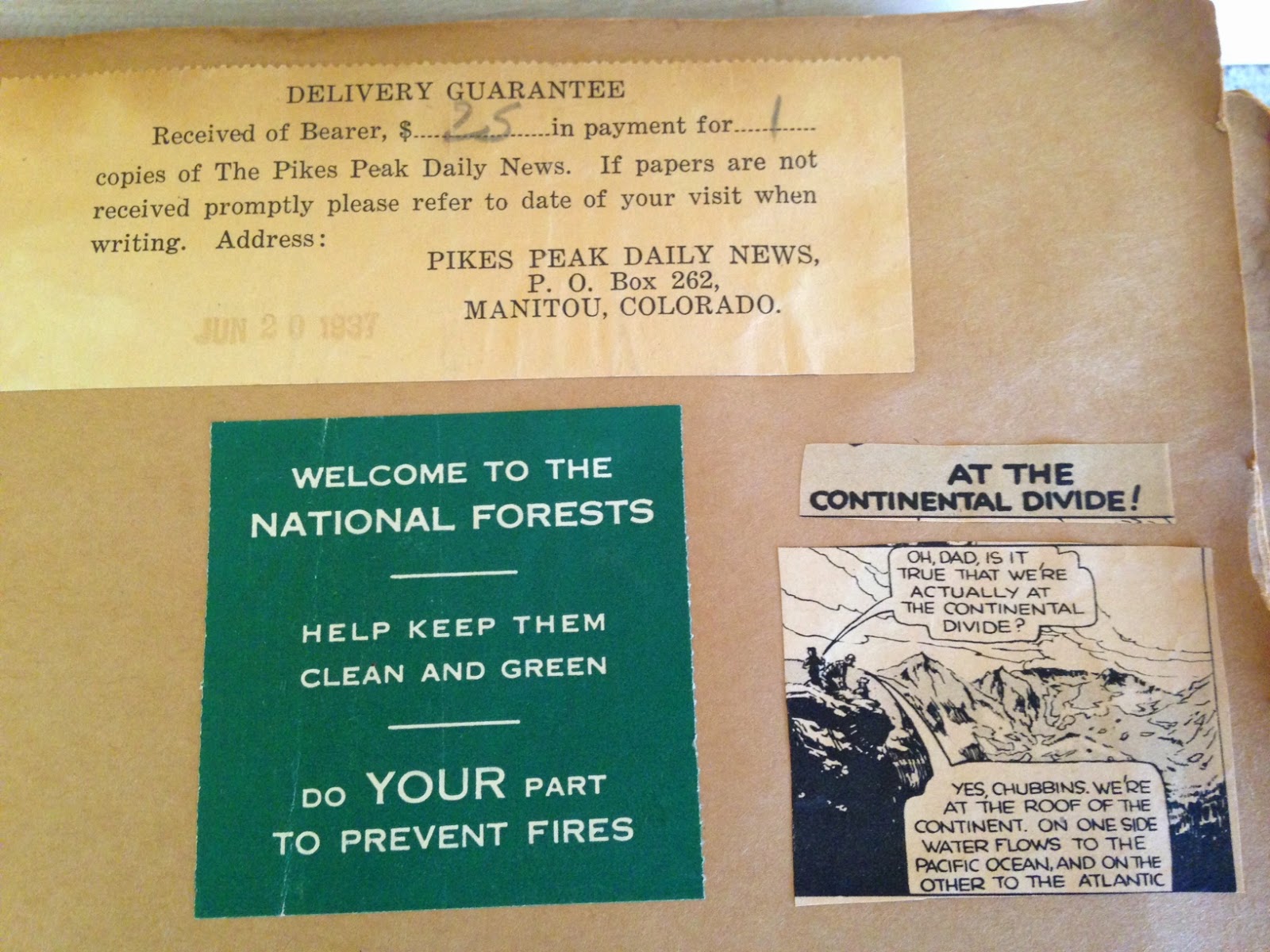 On the bottom half of that page, our notorious scrapbooker writes, "Tennessee Pass is the most important pass in the center of the state, with a road so well constructed that the Continental Divide can be surmounted in high gear. Thru the winter it is usually the only northern pass kept open for travel. The pass itself is but a few feet higher than the city of Leadville - most famous mining camp which lies about ten miles below it."

The postcard below is titled Looking East from the Summit of Tennessee Pass, Altitude 10,240 ft.

In the cartoon, Dad is telling his daughter, 'Now Chubbins, we're almost two miles above sea-level. See that lightening? There's a thunderstorm in the valley. But up here on Flattop we look down on it while the sun shines.' 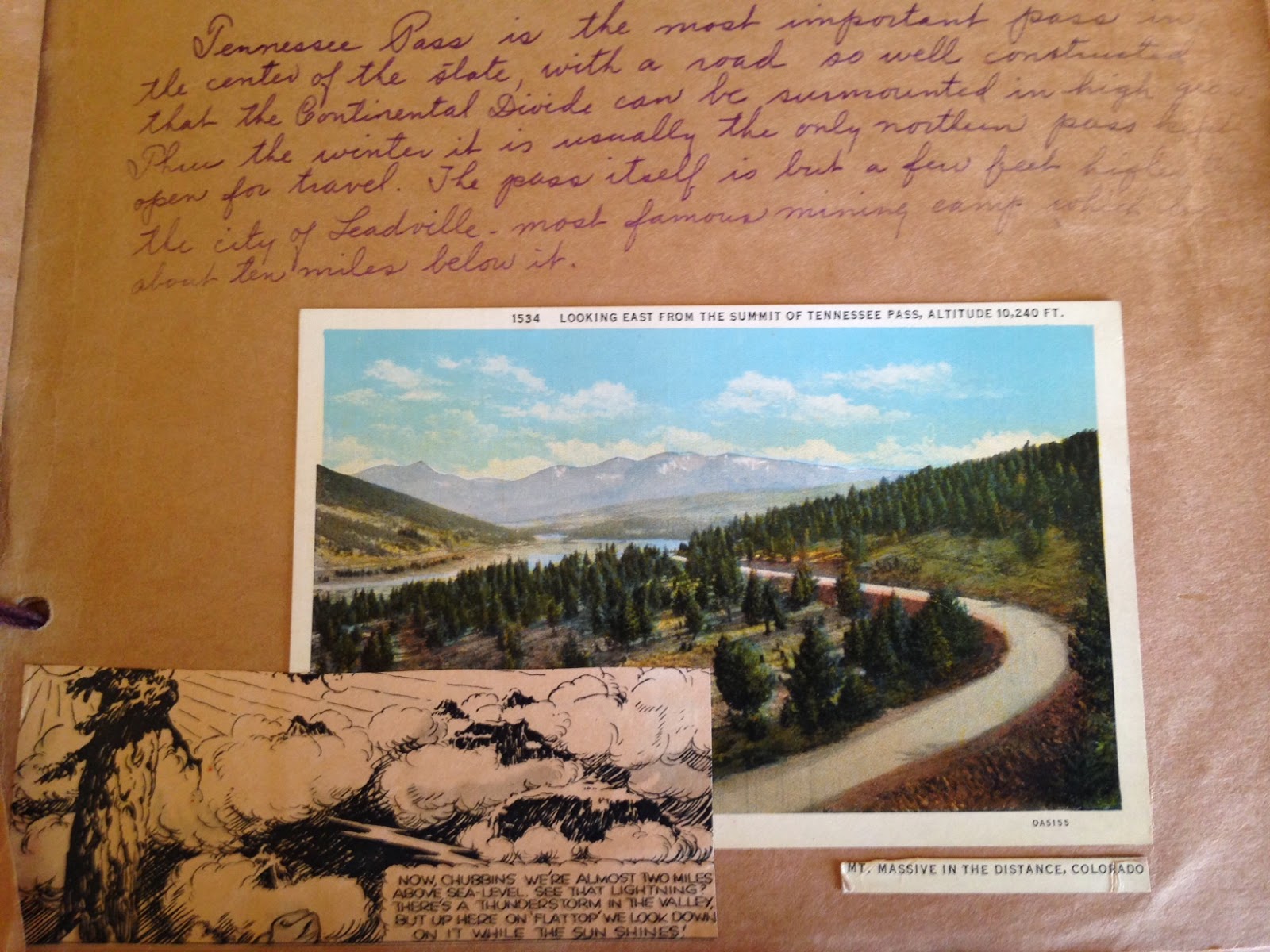 Though I'm sure the Johnson family were having a wonderful time, poor Chubbins' teenage years became riddled with low self-esteem and a poor body image.