While in Los Angeles,  the Johnson family made a pilgrimage - as many still do today - to Grauman's Chinese Theatre. The movies playing at the theater that day (after the Fox Movietone News, with Lowell Thomas announcing) were Married Before Breakfast, with Robert Young and Florence Rice, and Slave Ship, starring Elizabeth Allan, Mickey Rooney and Wallace Beery. (I linked the movies to their IMDB pages, in case you're interested.) 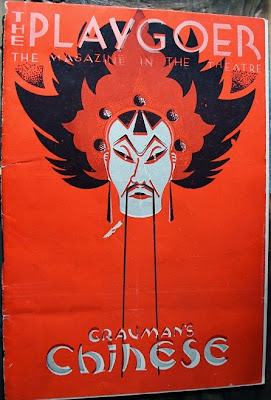 In the scrapbook, there are a lot of newspaper clippings dedicated to Slave Ship. Our industrious scrapbooker pasted many clippings from the movie not only inside the scrapbook, but also in the theater program. Maybe the Johnsons only saw one movie that day, or perhaps Slave Ship made the biggest impression on our scrapbooker. Hard to say. 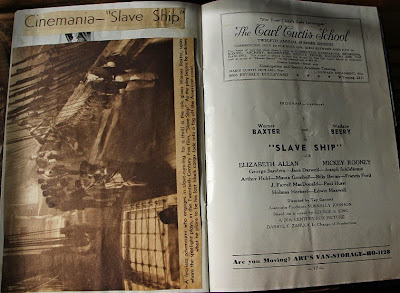 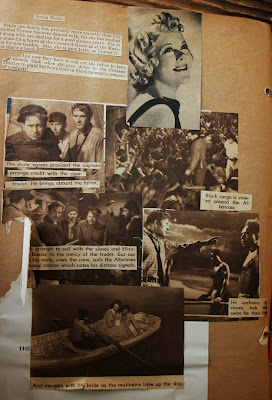 In the above scrapbook page, (dedicated to Slave Ship and, for some reason, Sonja Henie) you can see that racism was alive and kicking. In the clipping just below Ms. Henie, the caption reads "Black cargo is stowed aboard the Albatross." And by black cargo, they mean slaves. People.

My favorite things about the theater's The Playgoer booklet are the advertisements. There are ads for dress shops, French restaurants, the Sunset Club, flowers, candy, golf, wedding shoes, Nutburgers ("Hollywood's Most Famous Sandwich") Ron Rey Rum, fur storage vaults, the Tropics (to which "your host 'Sugie' invites you to") Holly Ho Chop Suey, Schwabs, Clarence's Cafe (whose specialty is chicken liver saute) and other fine establishments. 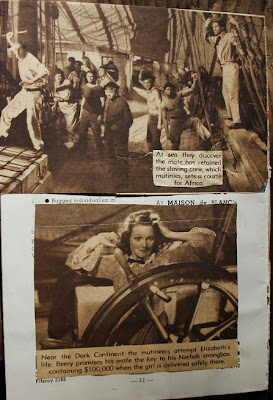 Above is the back of The Playgoer, with more newspaper clippings of Slave Ship glued on. 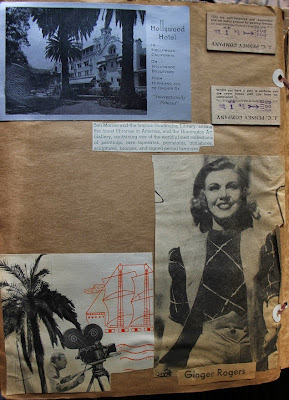 Above is another page in the scrapbook. There's a clipping of Ginger Rogers. Up top are a couple of what I believe to be fortune cards from a J.C. Penney store. They are both dated July 1, 1937. The top one says, "You are well balanced and reasonable and not easily swayed by passing fancies." The one below that says, "When you have a duty to perform, you are never happy until you have accomplished it." So sayeth the Great J.C. Pennies!

The black and silver postcard at top is from the Hollywood Hotel, a famous spot for celebrities and royalty. It was located near Grauman's, and torn down in 1956. The site of the Hollywood Hotel is now occupied by the Hollywood and Highland Center, where the Academy Awards are currently held.

I'll end this post with a Youtube video of the Fox Movietone News from 1937. Not sure the date on this one, just the year, so it might have been the one playing at Grauman's when the Johnsons were there. Aw, heck, let's just pretend it was!

Next up, the Johnsons visit Forest Lawn Cemetery!