Just Call me Chuck and the Twins and a Great Year Despite Myself; 1987/88.

When I graduated high school in 1987, I figured I was pretty much through with band. I'd been in Concert Band, Jazz Band, Pep Band and Marching Band, and my senior year was capped off by our Marching Band's trip to Hawaii to march in the King Kamehameha Parade a couple days after graduation.

Don't get me wrong - band was a lot of fun. But it was also a lot of hard work. In the video above, we're wearing full wool uniforms (meant for chilly Minnesota autumn nights) on a five-mile parade route through Hawaii on a 95-degree day (behind horses, even!) Being in marching band had been a great lesson in discipline and its potential payoffs, but I was so ready to be done with it and move on to other things.

Cut forward to the end of summer. My high school girlfriend, whom I was madly in love with, decided it would be best to (say it with me!) see other people - you know the drill. Long story short, I was devastated.

I hadn't really been on the ball as far as planning for college, and anyway, thought it would be a good idea to save some money by living at home and getting some core credits out of the way for cheap, so I ended up going to our local community college, RCC (Rochester Community College). A guy I knew recommended I sign up for band there, but like I said, I was tired of that whole gig.

He kept telling me I should join, and that I'd like the instructor, but I think it was my mom who eventually talked me into it. So I joined.

I'm glad I did. The music program at RCC was wonderful. The concert and jazz bands were led by Charles Blattner, and I knew things were a little different when on one of the first days, I started to ask him a question in his office. "Mr. Blattner," I started.

He held up his hand to stop me. "Just call me Chuck."

Chuck brought the joy back into music for me, the fun of playing in concert and jazz band. It was in the way he taught the class, in the way he was always around between classes to listen to you or give advice if you asked for it. It was in the community of fellow musicians he fostered. When you were in band, you weren't just in band - you suddenly had a whole new family. Band (and choir) students hung out by the band/choir room between classes to chat, do homework or goof around.

But I was still depressed. She was the love of my life! I'd been so sure...

Luckily, it was also the year the Minnesota Twins won the World Series. The first time that had ever happened, and it helped distract me from that deep gut ache of feeling sorry for myself.

Back to band. I played drums. In the percussion section, one of the dangers was the amount of drummers who chewed tobacco. They'd each have their spit cup sitting on the percussion cabinet, and for those of us who had cups of water or pop, you had to be careful not to absentmindedly pick up the wrong container. But the drummers - they were a fun bunch.

There was also Vicky's cabin: 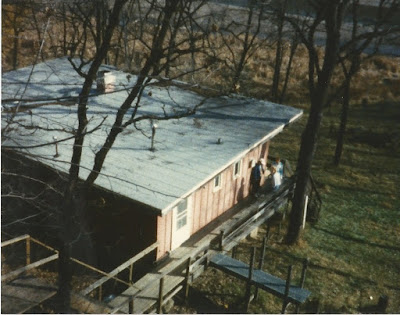 It was located about 10 miles out of Rochester near the small town of Oronoco at the bottom of a hill next to a small river. To get down to it, you either had to navigate a long set of winding stairs, or take this electric tram down:

Anyway, the cabin was sparsely furnished, but it had a kitchen, a bathroom, places to sit...pretty much all we needed. Band members went there after concerts, or school dances at the Pla-Mor Ballroom (old time venue - once hosted classics like Jerry Lee Lewis, etc.) and drink beer and have fun. Most of us ended up spending the night there, sleeping on the floor (or on a couch if you were lucky). The cabin also came equipped with a foghorn Vicky blew when hunters crept quietly by.

In February or March, the band had its annual trip to Florida - Bradenton, Orlando, plus a day at Daytona Beach. We'd play some gigs, but mostly it was just a lot of fun. Seeing sights during the day (Disney World, Cypress Gardens, the now-defunct Kapok Tree Restaurant, beaches, etc,) and at night we'd go from room to room, drinking and munching on things and having a good time.

About a month or two or three later, there was also a festival of community college bands and choirs up in near Brainerd; usually at Cragun's or Breezy Point. We'd stay the weekend, again, playing music during the day and participating in drunken revelry at night.


Anyway, it was a fun time. Fellow former RCC bandmate Wendy S. summed it up nicely on Facebook recently, when I posted a picture of the cabin tram. She responded with: "We didn't know it then, but it was the time of our lives. Pretty care free days! When I think of all the stuff young people can get into trouble with these days, I know for sure we were blessed to have each other to hang out with!"

Very true. And it came at a time in my life when I needed it most.

And especially thanks to Chuck Blattner for making band more than just a credit to be earned. Thanks for reminding me about the joy and camaraderie that playing music can bring.
Posted by Joel Arnold at 12:41 AM