I grew up in Rochester, Minnesota, and one of my favorite places there has always been Quarry Hill Park. My elementary school often took field trips there, mainly to the nature center, but it was later, when I found out that the quarry the park is named for was once worked by patients of the Rochester State Hospital that I really became fascinated with the grounds.

You can walk along one of its trails and suddenly come across something like this - an old fireplace just sitting out in the open. According to a sign there, this spot used to be a landfill for the hospital, but it was covered over and this fireplace built for patients' social gatherings. I love the row of stones that form the arch-like portion (look closely) - they look so haphazard, like they could fall at any moment. 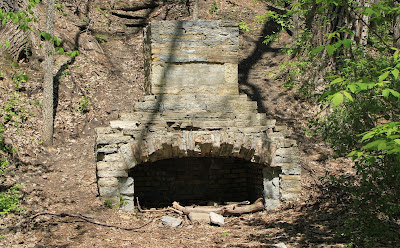 The patients farmed and quarried the land, and in the 1880's a patient named Thomas Coyne led a team in digging caves in the sandstone to store vegetables they grew. Coyne was an interesting fellow in that he believed that he was Jesus Christ. He also chiseled a verse in the cave walls - the first stanza of an old song called 'Blue-Eyed Mary' - and signed it 'Coyne the Prophet.' The caves were open until 1992, when they closed them off to the public. Here's the entrance to one section: 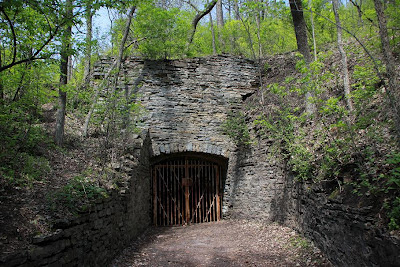 I recently wrote a short mystery which will appear in a crime anthology later this year called "Blue-Eyed Mary" and this was the inspiration for it.

The cave is in the shape of a horseshoe so that wagons could go in one end, drop off (or load up on) supplies and continue on without having to back up.

There were two other entrances to the cave, but unfortunately, they've been bricked up. I wish they would've simply put gates on like in the photo above, since the bricked up openings look ugly.

On Halloween they used to turn this into a haunted cave and have spooky displays in each of the compartments. I don't think they still do this, but I could be wrong.

I held my camera through the bars to get this shot: 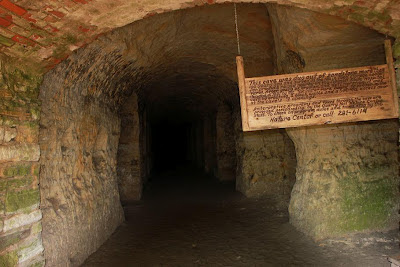 Every once in a while they give tours.

Found this tree growing around an old metal bar: 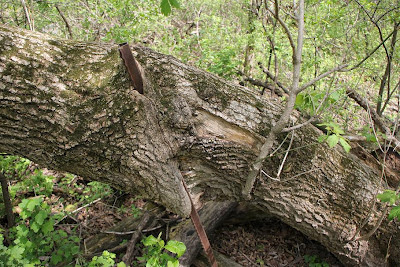 Here's an entrance to another cave in the park, this one right on the edge of the cemetery where approximately 2,000 patients are buried. They used this cave to store bodies when the ground was too frozen to dig in: 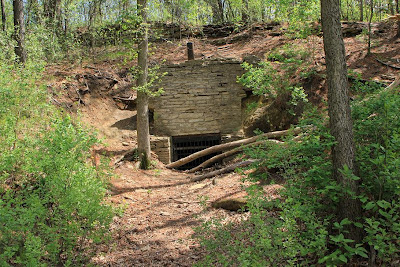 Just to the left of the above entrance is this colorful bit of sandstone. There's graffiti on it, although you can't really make it out. But I love the rusty color. 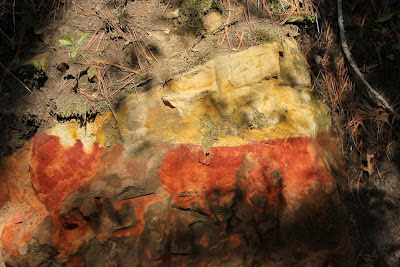