I gave a presentation on Ox Cart Angel in East Grand Forks, MN on August 11th as part of their 125th anniversary. I went up a day early, however, so that I could drive an hour farther north to take a look at Pembina, North Dakota. Pembina is right in the upper northeast corner of ND - you could almost spit into Canada from there, and then turn around a bit and sneeze into Minnesota.

I've wanted to visit Pembina for a long time, because the earliest ancestors on my mother's maternal side - that we know about - lived there. Also, it's where Ox Cart Angel starts out. The main character's home is Pembina.


Pembina was once quie a bustling place - a transportation hub for the oxcart trails. My great-great-great-great grandfather - a French Canadian - and his wife - an Ojibwe woman - lived there back in the early 1800s.

Here's where the Red River and Pembina River merge:


They also probably lived near this spot: 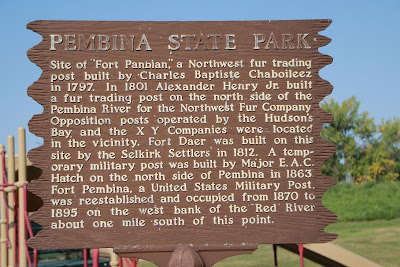 Although now, this is what is there:


I stopped at the Pembina State Museum, which is a nice place. They have a replica of a Red River cart there: 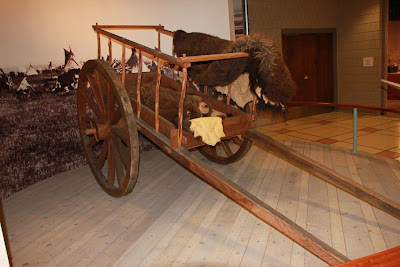 I went up in the tower, where there's a viewing platform.


Here's the best view from the tower:


Anyway, it was very cool to see the place. It felt like a connection to my past; like the past had come up to meet me. I left as the sun started to set - the motel there was booked for the night, so I stayed in Drayton, which is a bit south of Pembina. The next day I headed down to East Grand Forks for my presentation at their library. It went well, and the people hosting the event were incredibly nice. I'll talk a little more about that at another time.