The day after my sojourn to Pembina, I drove down to East Grand Forks, Minnesota. They were in the process of celebrating the city's 125th anniversary, and I wish I could've been there for much of the celebrations, because it sounded like a fun time. My talk was at the East Grand Forks Campbell Library, which is a beautiful building. Unfortunately, I neglected to take pictures! The library used to be located in a different building, but the floods of not too long ago destroyed it. The folks of East Grand Forks came through, however, and donated enough money to build the present building.

Anyhow, the talk went well, and the audience asked a lot of good questions. They even bought some books! So much thanks to the folks of East Grand Forks, and to the librarians and people of the Historical Society there.

The next day I stayed in Crookston, MN. They were holding their annual Ox Cart Days festival the following week, which I couldn't make it to. However, the Polk County Historical Society and Museum bought a number of copies of Ox Cart Angel to sell in their store. If you're in the area they've got a lot of interesting things to look at. 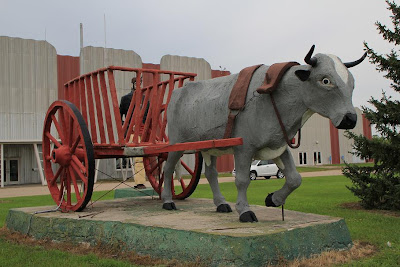 It was a wonderful trip!

Okay, now tilt your head to the right (I still can't figure out why I can't get pictures that were originally taken in a portrait format to rotate the correct way when I transport them to the blog.)