Russell Dickerson created an illustration for my short story Fetal Position when it appeared in a small horror zine called Wicked Hollow a while back. The illustration went on to be included in Spectrum 9; The Best in Contemporary Fantastic Art. (You can check out the illustration here.) Anyway, I've followed Russell's work ever since, and I'm thrilled he agreed to answer my 5 questions.

BUT before or after you check out his answers, you need to see his step-by-step process of how he created the above work. It is incredibly cool! See it here. I'll wait.

1 – What have you been working on lately?

I recently finished a cover for S.P. Miskowski's book Astoria – part of the series of covers that I've done for her. I'm currently working on the cover for Vincenzo Bilof's Queen of the Dead, the second cover I've done for his zombie series. I'm also getting back to working on original inks, hopefully I can do quite a few of those in the coming months. 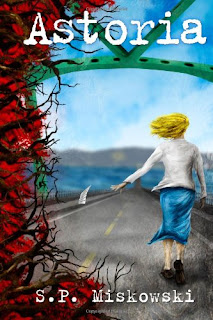 I can't say that I have just one specific art or favorite piece, because I love so many artists and works. It's one of the reasons I keep a running "Creations that inspire me" Pinterest board, since I always find new pieces to love. Put on the spot, though, I could maybe toss out a few artists. Caspar David Friedrich, Franklin Booth, Bernie Wrightson, N.C. Wyeth, Michael Whelan, Thomas Cole, Berkeley Breathed, Arnold Bocklin, and the list goes on and on.

I think it's the idea that I can explore these different worlds, different visions even, that I can't see in real life. I maybe don't even want to see them, especially as many of my pieces are horror. But the exploration of the unknown, of the strange and unusual, is fascinating to me. It's something that art is perfect for.

4 – Any good anecdotes about being in the business?

I'm sure I have lots of convention stories especially, but I'd have to have a fair amount of drinks to go into them.

5 – What was the most helpful craft advice you’ve ever received?

The funny thing is, I don't get to talk to artists that often. My list of friends is chock full of authors, so I don't get to talk shop very often with other artists. But I think the authors that I know always have great advice that works for any kind of creator. I think the most important of those, that many of the fine authors I know have said, is that the most important thing any creator can do is put down that first word (or line in my case). One word leads to two, two leads to a sentence, and before long you have a whole story created. For me, it's always that first line that's the worst, so it's sage advice.
Posted by Joel Arnold at 8:14 PM