I first became aware of Weston Ochse when I came across a short story collection that he co-wrote with author David Whitman called Scary Rednecks & Other Inbred Horrors. Who can resist a title like that? The stories are a mixture of humor and horror, and I loved it! Anyway, fast forward a dozen or so years, and Weston is still writing like a madman. A very successful madman! I asked Weston if he'd like to answer my five questions, and he did so - all the way from Kabul, Afghanistan! 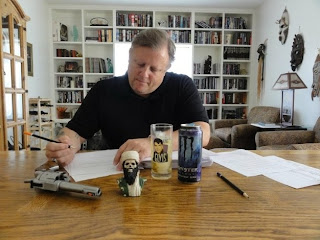 Babylon Smiles. As improbable as it sounds, it’s an Iraqi War Heist Novel that’s been compared to the movies Three Kings and Kelly’s Heroes. I tried to paint a picture of what life was like in 2003 Iraq, before the insurgents and roadside bombs. I had help from a lot of veterans and have been told that I got it right. Although this is on the surface a military thriller, it’s really about people, and about their interactions and how they come to terms with themselves, each other, and the idea of being millionaires.

This is a ridiculous question and I refuse to answer it correctly. There are way too many great authors out there for me to even consider narrowing it down to one. So let me tell you about the best book I read this year. It’s called American Rust by Philipp Meyer. From a writer’s point of view, the author used stream of consciousness to create character, plot and conflict, something which is exceedingly difficult to pull off. From a reader’s point of view, Meyer pained a vivid picture of the diaspora that used to be the Steel Belt, and how the movement of jobs and hope destroys people and places.

That moment where you don’t really know what you’re doing and everything magically comes together. As it turns out, your lizard brain knew what was happening all along.

You never know when you’re going to meet someone who can affect your career in good and or bad ways. Who knew that meeting a stringer for Dimension Films in 2004 was going to pay off six years later when the same person asked me to write a novel for him for Thomas Dunne Books/St. Martin’s Press. The learning point here is to always act professional. And if you fail at that, at least be interesting and unforgettable.

From Tom Piccirrilli. Write 5 pages a day, every day for three months. That’s a novel.

to see his newest releases