Taco the Sled Dog - or - my Daughter's Book! 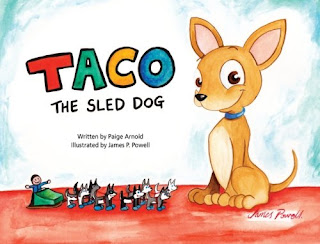 She got the idea when she was eleven, after seeing a video of sled dogs; she wondered what would happen if a smaller dog wanted to join their ranks. Would that be possible? And how would a little Chihuahua be able to compete with a group of large Huskies?

Over Thanksgiving vacation last year, after Paige had her fill of relatives, Taco was born! Paige wrote a first draft. After Melissa and I read it, we encouraged her to keep working on it, giving her a few tips and suggestions. So she rewrote it. And then rewrote it again. She quickly realized that writing, though fun, was a bit harder than she had at first thought. But she kept working on it.

We thought this would be a good learning experience for the Paigenator, so soon, she and Melissa started looking for artists through the Children's Book Illustrators Guild of Minnesota, and they found a guy named James Powell who was also a Godzilla fan (Paige has seen almost all of the Godzilla movies). His art looked perfect for Paige's story, so we made a deal with him. He started sending us his ideas for the book's art, and with each new batch of drawings we received, we became more and more excited. His illustration's make the book come alive!

Paige even made her own YouTube video for it:

At first, we just planned on going through CreateSpace to produce the book, and we did use them to make a 8.5" x 6.5" version available through Amazon for $7.99. BUT we also liked the story and illustrations so much that we are having a 11" x 8.5" version printed through a traditional printer. So if you'd like a bigger version (for $9.99 + shipping) just send an email with TACO THE SLED DOG in the subject line to joelarnold@mchsi.com, and we'll get the details worked out. The larger version will be available next week (July 18th).

Anyhow, of course I'm a bit biased, but I think it turned out wonderfully. I hope you'll check it out!