Brett Alexander Savory is the Editor-in-Chief of the wonderful Chizine; Treatements of Light and Shade in Words, for which he won a Bram Stoker Award. He is also the publisher of Chizine Publications. As if that ain't enough, he's also a writer. Plus he lives in Toronto, which from what I understand, is a small town in Canada. Much thanks to Brett for answering my five questions. And a word of warning...don't stare into his beard too long. It might give you nightmares. 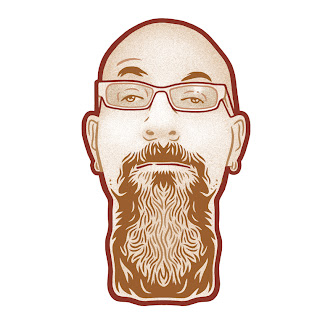 I'm a little under halfway through my third novel, Running Beneath the Skin. Here's a quick intro to the premise: Henry Kyllo and his best friend, Milo, are Runners—part of an underground society called Inferne Cutis (Latin for ‘Below Skin’). Their society’s goal is to reach full lead content in their bodies (through bullets), which leads to further evolution—possibly even transcendence to a higher level of being. Tracking these Runners are Hunters, who've become part of the society through symbiotic need. Both Runners and Hunters believe themselves to have evolved from the human race; they see themselves as the next step in the evolutionary chain. It gets weirder from there.

Favourite books of all time are The Hitchhikers Guide to the Galaxy novels. One of my favourites in the non-funny world (and yes, I'm aware I published it) is Filaria by Brent Hayward (http://chizinepub.com/books/filaria.php). And not that you asked for a second, but I also heavily dig People Live Still in Cashtown Corners by Tony Burgess ( http://chizinepub.com/books/people-live-still-cashtown-corners.php). Yep, published that one, too. Insufferable!

No good anecdotes, really, no, but if I could share one piece of advice, it'd be to write what you want at all costs. Don't listen to agents or editors or workshop groups or anyone else. Now, this is with regard to the actual content of the work. I don't mean the bone and gristle of a piece of fiction—always take advice from others you respect when it comes to the actual machinery of writing. But the content and the style should be all you.

My own that I just wrote above.
Posted by Joel Arnold at 12:32 AM