I've had the privilege of appearing in a number of mystery anthologies alongside Carl Brookins, and have been at numerous signings and other events with him. Aside from being a great guy to hang out with, he's also part of the Minnesota Crime Wave, along with Ellen Hart and William Kent Krueger - a trio who attends events dressed up in old-time 20's-style gangster duds while giving talks about their writing. Carl has written numerous mysteries, and is often seen at events with camera in hand. I'm happy to have Carl on board to answer my five questions! 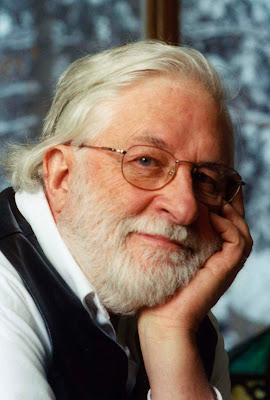 My latest detective novel is called The Case of the PurloinedPainting. It features my short private detective, Sean Sean, in his fifth case. (Four novels and a short story). It’s from North Star Press of Saint Cloud. The plot concerns the murder of a Jewish immigrant to Minneapolis from Poland. Mr. Gottlieb came here to pursue a new life after his homeland was destroyed in WWII. The stolen painting becomes the basis of wealth and prominence for a troubled Minneapolis family. When international criminals appear on the scene, Sean becomes involved, even though he usually refuses such cases. As he is wont to mutter, “I’m good, but not that good.” A mysterious blond floats in and out of view and Sean is forced to fight for his life and answer the questions. 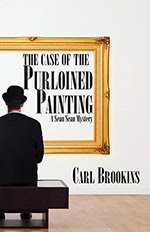 2 – Who’s your favorite author and/or what’s your favorite book?
This is very hard to answer, but I guess I have to stick with Willy Shakespeare who had the greatest handle on the English language of any writer, living or dead. Some of his plots were dynamite.
3 – What’s your favorite aspect of writing?
Revising. No question about it. I love to take the crude second or third draft, pull it apart, ask questions of it and polish, polish, polish. The satisfaction of getting a scene precisely right is enormous.
4 – Any good anecdotes about being a writer?
Hmm. I love meeting readers. I love discussing the crime fiction product and community of writers. That’s one of the principal reasons I review crime fiction. It’s a way to meet authors, but more important, it’s my way of giving back to a community which has given me so much pleasure through the years.
5 – What was the most helpful writing advice you've ever received?
Ah, one of Elmore Leonard’s rules: “leave out the parts reader tend to skip over.” That’s hard for me to do, and isn't it interesting that since he just died, Mr. Leonard is getting all this attention?

Visit Carl's Amazon Page and check out his work!