Judith Yates Borger and I share the table of contents in not one, not two, but three mystery anthologies, so I've had the chance to chat with her at a number of signings. She's a former reporter for the St. Paul Pioneer Press, but decided to look elsewhere for work when they wouldn't reimburse her for her car that was firebombed during an assignment. Judy still practices journalism at MinnPost.com, and she also writes the Skeeter Hughes mystery series. I'm pleased that she took the time to answer my five questions! 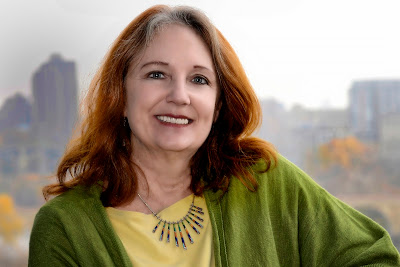 My next book is Who Bombed the Train? In the first chapter I blow up the Blue Line light rail train that runs between downtown Minneapolis and the Mall of America. Our intrepid reporter, Skeeter Hughes, sets out to find the bomber, who killed 62 people and the mayor, who happens to be Skeeter's best friend.

My favorite author is Sue Grafton. Some readers have compared my style to hers. I take that as a compliment. I have too many favorite books to choose just one, although Watership Down, which I read decades ago sticks in my mind as a lovely book.

Oddly enough, my favorite aspect of writing is revising after the manuscript has had a close look from a good editor. Making the words better is always preferable to trying to come up with the right words in the first place.

My first book Where’s Billie? involves prostitution run out of the Mall of America. While researching it I was watching a television show about teen trafficking. I happened to take notes on my kitchen counter and left them there when I had to go out. My husband came home in the meantime and found a note on the kitchen counter that said "blow jobs $50." He was curious to know what I had been doing.

I did not follow the best piece of advice I got. LarryMillett told me to write my first book, put the manuscript in a drawer then write my second book, never letting the first see the light of day, because the second would be so much better.