My parents have a photograph of an ancestor – a woman, who according to family lore is a Pembina Ojibwe. 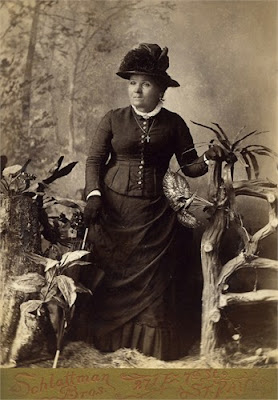 I wanted to find out more about her, so I started working on our genealogy.

You know the game of ‘telephone’? It’s where there’s a line or circle of kids, and the first one whispers a phrase to the kid next to him, and that kid repeats the phrase to the next kid in line, and on and on until at the end, the whispered phrase is revealed by the last kid in line, and it’s nearly always completely different than when it started out.

Turns out our info about the photograph was like that.

Long story short, the woman in the photograph was actually named Lucy, and she had emigrated from in the early 1820s. She was running a tavern in Prairie du Chien , her first husband deceased by the time my great-great-great grandfather Louis Desmarais met and married her. They moved to around 1850.

Anyway, it was Louis’s mother who was Ojibwe. His father was French-Canadian.

Meanwhile, I’d been looking for information on this Pembina ancestor, and though I couldn’t find anything about her (yet!) I learned about the importance of Pembina and the ox trails in the 1800s. It was fascinating stuff. Here was a significant part of and history that I had never heard about in school, even though I grew up in .

This eventually led to my writing Ox Cart Angel. I haven’t yet found my great-great-great-great Ojibwe grandmother, but the search led me to thirteen-year old Claire – a Métis girl – her photographer father Xavier, and a one-horned ox named Bonebag. I sometimes think of Claire’s mother as my g-g-g-g-grandmother. She’s a big part of the story, but only through the fading memories of her child.