Michael Crane is one of those guys who is immediately likable. I met him online on a writers' forum, and he went out of his way to say hello - not trying to sell me his books, or anything like that, which can be a bit irritating. He just came across as a good guy, and for some reason I did buy a couple of his short stories. Wait a minute...that bastard! Anyway, Michael writes horror, which is another plus in his favor, and I'm happy to have him on board to answer my five questions. 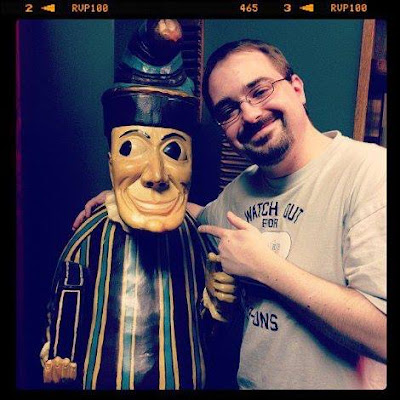 This is my first legit attempt at a longer work. I usually write short stories, but I’ve always wanted to try my hand at something longer. It’s a novella called Giggles. Mr. Giggles is a homicidal sock monkey that’s from my Lessons drabble collections, although this is a standalone and folks who haven’t had the “pleasure” of meeting Mr. Giggles won’t be lost. The basic premise is these two crooks who have to lay low after a botched bank robbery find this house that’s conveniently empty, not realizing an evil children’s toy is looking for a few new playmates. It was a lot of fun to write, even if it disturbed the hell out of me at times. It’s my first serious outing at writing longer horror. 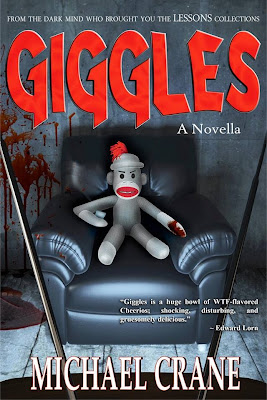 Too many to name. I’m not sure I have a certain favorite. Raymond Carver was a huge influence on me, because he showed me stories didn't have to have over-complicated plots. They could be about everyday things. That was really important to me, and he’s definitely the biggest influence when it comes to my short stories. Favorite book? Way too many to name, but I can tell you my favorite horror novel that I've read this year. Joe Hill’s NOS4A2. Hands down, one of the best horror novels I've read in a long time. In fact, it was key to me wanting to finally write Giggles. For any fan of horror, I highly recommend Hill’s book. Don’t let the length intimidate you any. It goes by real fast. Once you start, it’s very hard to put it down.

Seeing a story unfold before your eyes, and knowing that it’s coming from you is one of the greatest things ever. One of the toughest things about being a writer is the fact that you’re going to have a ton of ideas, and a lot of them are going to be absolute garbage. But when you finally land on that special one, it’s a great feeling. Writing is hard work, but it’s also a lot of fun when you’re on a roll.

My Grandma Crane always wanted to read my stories, but she doesn’t like scary stories, and stories with foul language. That’s almost everything I write! My stories can contain a lot of mature subject matter. Hell, I don’t even like my parents reading my stuff, and thankfully, even though they fully support me and are proud of me, they don’t read my writing. But Grandma wouldn’t let the issue drop. So I grabbed one of my stories from my short story collection, “Uncle Lenny.” I had a feeling she’d really like it. And even though there wasn’t that much strong language in it, I still made a version specifically for her where I edited out any bad language. I don’t like censoring myself, but I figured that was a special occasion. She loved it, as did Grandpa Crane. They kept telling me how much they loved it, and I knew they weren’t saying it just because I’m their grandson. They really meant it. I’m glad I was able to find something she could finally read. I think she still wants to read more, but that’s going to be tricky. Don’t think I’ve written anything lately that could be considered family friendly.

To quote Ernest Hemingway, “The first draft of anything is sh**.” When it comes to the first draft, it doesn’t have to look pretty. Your one and only goal is to tell the story. Write that sucker down. Switch POV in the middle of it if you have to, just to get a different take on what you’re writing. If you’re stuck on something, skip it and jump ahead in time. Don’t go back to edit or fix what you’ve written, and keep pressing forward. You’re going to have to rewrite it anyway.