I first met W. D. Gagliani at the 2002 World Horror Conference in Chicago. A funny story about that - we were both attending a party thrown by Leisure Books, and aside from the usual free booze, they were also giving away free books. I was holding one of these books and reading the back - can't remember which book it was - but as most books do, it had a number of book blurbs on the back from reviewers and authors. I had just read one of the blurbs by W. D. Gagliani, and then I looked up, and there he was, standing right in front of me! He's a really nice guy and a hell of a writer, too. I'm extremely pleased that Bill agreed to answer my five questions! 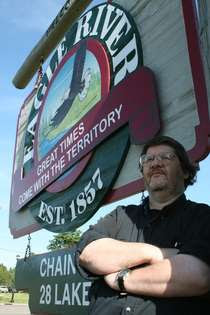 1 – What’s your latest book about?
Wolf's Cut is the 5th Nick Lupo novel and follows homicide Detective Lupo as he gets dragged into a secret mob takeover of the tribal casino near Eagle River while at the same time fighting off the surviving elements of the evil Wolfpaw Security firm and their attempted coup of the US military with werewolves and that modern nemesis, the drone. In the parallel story, we follow Lupo's father as he hunts Nazi werewolves in post-World War II Italy. Wolf's Cut will be published by Samhain in March 2014. 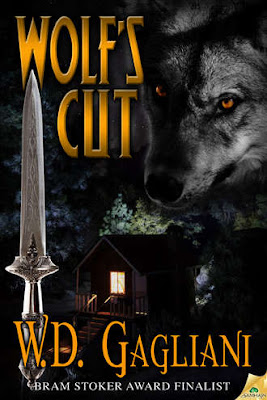 2 – Who’s your favorite author and/or what’s your favorite book?
I have many favorites! If I had to pick, it would be the brilliant fantasist Tim Powers. My favorite book would be one of his, and right now I'd say it's a 3-way tie between The Anubis Gates, Last Call, and The Stress of Her Regard. Technically Powers was one of the creators of Steampunk, and his work is often referred to as "secret history" as opposed to "alternate" history, but two of these novels (and many of his) I usually refer to as North American magic realism.

3 – What’s your favorite aspect of writing?
Telling a story that reminds me of what I like to read. Playing God, as it were, and creating every aspect of the story – but, paradoxically, I also love when the characters take over and deviate from my plans for them.

4 – Any good anecdotes about being a writer?
As a newly published author with a fairly widely distributed paperback novel I thought my local Barnes & Noble and Borders stores would knock themselves out hosting me in their stores. Except for about three stores (and I was friends with the managers in two of them), all I got was a collective yawn. The brush-off, the disinterested and dishonest "the manager will get back to you," and near-hostility of "we don't have the staff to bother with signings." It may not be a single anecdote, but it happened enough that it brought me down to earth quickly. No matter how many people find it cool that you've published, there are many more who are a lot more impressed if you can change the plugs on a Harley.

5 – What was the most helpful writing advice you’ve ever received?
Even though my first publisher and I came to dislike each other, I still credit them with the excellent initial editing of my first book, Wolf's Trap… and the advice they gave me: don't kill the hero. I was a bit of a nihilist and wanted a downbeat ending to my stand-alone novel… but if I had followed my instinct, there would be no Nick Lupo series. So I always recommend listening to a portion of what people tell you. They might be wrong most of the time, but they might also be right!


If I can add a second bit of advice that I've seen and taken note of, it's that you must actually finish what you start. More "writers" start novels than ever actually finish them. Be part of the second group, no matter what it takes. A novel unwritten is a novel unsold, unread, and therefore unsuccessful.