If you like some thrills in your reading material, look no further than E. Kelly Keady. Another Minnesotan (what's with all these Minnesotan's on here?) who's always happy to talk shop to a fellow writer, or chat with an eager fan. I'm excited to have him on my blog, answering my five questions! 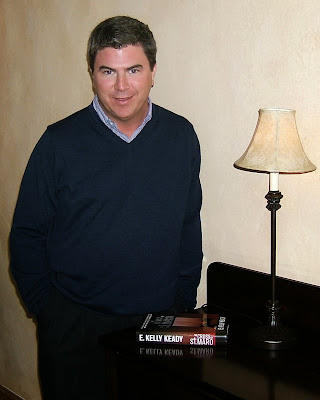 My protagonist is Peter Farrell, an ordinary man thrust into extraordinary circumstances when the President of the United States asks him to join a covert team’s mission to China to investigate the possibility of a weaponized bird flu virus.  In order to prevent a possible pandemic, Farrell travels from through the People’s Republic of and back to D.C. Among those who join Peter’s mission is covert operative Sebastian Pope, a killer struggling with his own past and with his own motives to prevent The Fall of St. Sebastian. Publishers Weekly called The Fall of St. Sebastian “a fast-moving suspense yarn that reads like a good season of the TV show 24.” 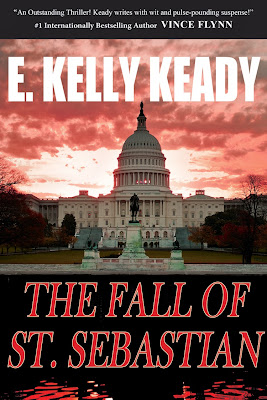 Favorite author has to be C.S. Lewis. He ignited my passion for reading at a young age with his Chronicles of Narnia. I would not be a writer unless I was a reader, so thanks, C.S. Lewis.

Favorite book, I know it is cliché, but it has to be the Bible with the caveat that I am adding some banned books too. For the past couple years, I have been engrossed in the Bible for research for my next thriller, The Secret of St. Jerome.  Even if you are an atheist, you cannot dispute the power and influence of the most popular, bestselling book in the world (yes, even more than adding up all the Harry Potter books). As a writer, you can appreciate how every sentence has a purpose. As an editor, I am intrigued by how some books/stories made it into the final draft while others were not only omitted, but deemed heresy. The Bible has something for everyone (history, mystery, drama, sci-fi, self-help, etc.). As a reader, I always find something new.

Using a narrow interpretation of “writing”, I’d say dialogue. Words are powerful on the page, but something extra is added when they come from a character’s mouth. Also, when writing dialogue, you never have a problem coming up with that witty comeback instantly as opposed to real life when you think of the right line five minutes too late.

Under a more broad definition of writing, it is research. I love research. Knowing full well that it will never end up in the final manuscript, I will spend hours on some tangential issue just because I find the research so fascinating. When I was young, I used to read individual volumes of the World Book Encyclopedia, flipping the pages and just picking something out of the blue. With this internet thing (yes, I think it is going to catch on), I am like a kid in a candy store.

I had a signing at a Barnes & Noble in New York City several years ago for The Cross of St. Maro. It was a nice showing of about thirty people on the second floor of the store. I knew about a third of the crowd and the rest of the faces were friendly enough, save one, a shady character in jeans, tattered shirt, an unzipped black hoodie with the hood up over his ball cap. Anyway, I am in my groove discussing my writing when Mr. Hoodie raises his hand and asks, “Who are your contacts in the Syrian intelligence?” Although impressed that he had been listening how I researched the backdrop of the book (a possible preemptive invasion of Syria by the U.S.), I kind of glossed over the question. A few minutes later, Mr. Hoodie raised his hand another time with a question about Syrian murder squads. Again, I somewhat answered the question. The rest of the night went as planned until I was signing the books. Mr. Hoodie finally makes it through the line and hands me a note written on a NYC bus transfer slip with some gibberish scribbled on it. Once I took the slip, he warned, “Be careful, now they know about you.” So by “good” anecdote did you mean strange?

My most helpful advice was from Vince Flynn. Vince taught me many things, but most important as a writer was perseverance. Just keep at it; don’t give up.
Posted by Joel Arnold at 9:28 AM