I often see Jason Wittman at local speculative fiction/fan conventions and readings, and he's always been a nice guy to talk to. We've shared a few table of contents in anthologies, as well. Plus, I recently read his novella St. Nicole, and it was one of the most imaginative stories I've read in a long time. It was a blast! Anyway, it's great to have Jason on board answering my five questions!

1 - What's your latest book about?

I'm actually working on two books at the same time (and I always do my rough drafts in longhand). One is kind of a ghost story about a young up-and-coming writer who is hired to finish a manuscript started by a recently deceased author hero of hers. She gets to live in the dead author's house and rummage through all the closets and attics (because the dead author didn't leave the pages of her manuscript all in one place, oh no). Soon after our heroine moves in, weird and spectral stuff starts happening.
The other novel is an affectionate parody/homage to the old Saturday matinee movie serials that were shown in movie theaters in the '30s and '40s (Flash Gordon, Buck Rogers, etc.). It involves spaceships, ray guns, and an alien invasion from the dark side of the moon. Also, it takes place in a sort of alternate universe. You know how in those old science fiction movies you could often see the strings that were holding the planets up in the air? Well, in this universe, that's how the real planets, including Earth, actually work. When one of the main characters, Dr. Damocles Henson, first conceives of this universe model, he calls it the Henson Theory of Pendular Planetary Suspension. But the laymen just call it "string theory."  :-D 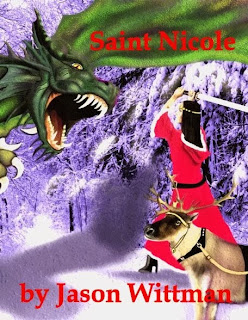 2 - Who's your favorite author and/or favorite book?

Tolkien, hands down. He all but wrote the book on world building, to the point that no author before or since has been able to touch him (except possibly Frank Herbert). Among his books, I like the recent The Children of Hurin, because I think it most closely resembles the stories he wanted to write. (The Lord of the Rings was written because people wanted more hobbits.)
3 - What's your favorite aspect of writing?

I like the "Ding!" moment, when you suddenly get an idea for a story, and it's often all right there in your head. For example, one day I was at work and some coworkers and I were talking about funny t-shirts we'd seen (like "There are 10 kinds of people in the world, those who understand binary, and those who don't). I told them about one I'd seen that said "Schrodinger's cat is dead" on the front, and "Schrodinger's cat is not dead" on the back. I got blank stares -- guess they'd never heard of Schrodinger's cat. Well, that isn't something you can explain in a sentence or two, so I stepped back to think of a decent explanation...and a story formed in my head.
4 - Any good anecdotes about being a writer?

There have been two times now where someone approached me online and asked, without my subbing to them, if they could reprint one of my stories (the first request came from Podcastle for On Bookstores, Burners, and Origami, my first major published story; the other is coming soon). I like to think this says something about the quality of my writing.
5 - What was the most helpful writing advice you've ever received?

Just keep writing. Like a lot of other things, it's something you learn by doing, and if you don't write, you can't get published. Or, as Terry Pratchett once said, "A writer who isn't writing is a bum."