Presently on Netflix are a bunch of Mario Bava's horror films, each with garish covers. I watched three of them, and here are my thoughts on them. I'll save my favorite for last. 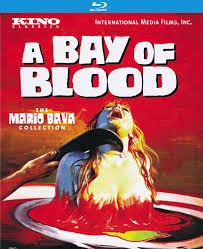 This is considered one of the main inspirations for the slasher movie genre that became popular in the late 1970s and beyond. It really has no plot, other than a bunch of people killing each other off in order to receive an inheritance. There are a lot of inventive killings here, a few which were even copied in later films (Friday the 13th, pt II in particular) but it's a rather cheesy film. Gruesome, sure, but almost silly in its over-the-top style. And of course it has the required skinny-dipping scene.

The best part of this movie is the ending. I won't spoil it, but it's an awesome come-out-of-nowhere sorta thing that actually makes sense and serves as commentary on the rest of the movie. 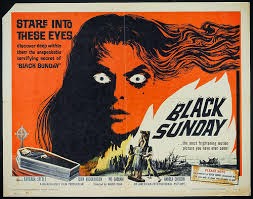 Bava had worked on many films before as a cinematographer, and also filled in on the director's chair for a few earlier flicks, but Black Sunday was his first truly solo directing gig. It's shot in black and white, and is about a witch who's put to death, and then comes back for revenge a couple centuries later. There are some truly creepy moments in this one. When she's put to death, they place a mask on her face (the film is also known as Mask of Satan) that have spikes to keep it in place, and this is pounded onto her head with a sledge hammer. When she comes back to life, the spike holes are always present on her face, which adds a real ick factor (in a good way) to the make-up effects.

I thought it was a decent film. Nice atmospheric sets, good use of black and white. A little corny at times, but hey... 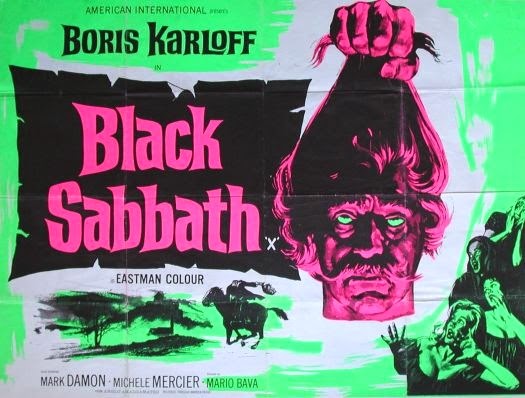 Of the three Bava films, Black Sabbath was by far my favorite. It's actually a trilogy of short horror films, all worthy of watching. Each is introduced by Boris Karloff - in a similar fashion that Hitchcock did for his television series. It's fun to see Karloff sans heavy makeup, and it looks like he's enjoying himself in these introductions.

In the first of the three, The Drop of Water, a woman steals a ring off of a corpse. She is later haunted by the ghost of the ring's original owner. Heavy creep factor in the makeup job done on the corpse.

Next is The Telephone, about a woman who receives mysterious phone calls from someone who should be dead. This one has a very Twilight Zone feel to it.

The last, and my favorite, was The Wardulak, starring Boris Karloff. A wardulak is an undead creature that attacks those whom it once loved - basically a vampire with family issues. Again, great makeup on Karloff that adds to the creepiness of the piece.

Like I said, all parts of the trilogy are very well done, and the sets, cinematography and acting are much better than in the other two Bava flicks I watched. So if you have to pick just one of Bava's movies, I'd recommend Black Sabbath. And yes, this is the movie that inspired the band Black Sabbath's name.

They're currently on Netflix, so watch 'em while you can!

If you don't have Netflix, here's a link to Black Sabbath