Currently available on Netflix is this early 1970s eco-horror flick. It's notable for starring an older Ray Milland and a young Sam Elliott - when his voice wasn't quite as iconic as it is today. 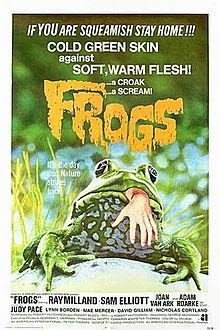 It's a silly film of a family on a large estate in Florida celebrating their grandfather's birthday (I think) and meanwhile, nature is getting its revenge on them. The funny thing is the way many of the people die in the film, especially when one of the women gets a foot stuck in some shallow mud, and is unable to defend herself against a slow moving snapping turtle. The frogs of the film don't ever actually kill anyone - the killing is done by snakes and tarantulas and alligators. The frogs just hop and croak menacingly.

There are also some good goofs in the film. There's a scene where a snake hangs from a chandelier, and during one of its closeups, you can easily see the hand that is holding the snake in position. There's also a scene of a flock of seagulls (not the band!) and if you watch closely, you can see little bits of bread being tossed into the air. I suppose to keep them in the shot?

Anyway, like I said, it's silly, and the best part about it is probably the tagline of "Cold, green skin against soft, warm flesh!"

Sure, it's on Netflix, but I wouldn't really recommend it, unless you're looking for a good laugh.