(for part 1 of this series, click here)
Catalina Island, Plus

Catalina Island lies of the coast of the Los Angeles area. Joan Johnson and her family ventured over there - whether by boat, plane or dolphin is hard to say - early July, 1937. The brochure pictured below lists fares inside. The full round-trip fare from Los Angeles to Catalina on a glass bottom boat, for example, was a mere $4.45. Round trip by plane was $10. Things to do on Catalina Island in 1937? Fishing, bus tours, speed boats, hunting, horseback riding, golfing, movie-going, hanging-out-on-the-beaching...probably much as it is today. 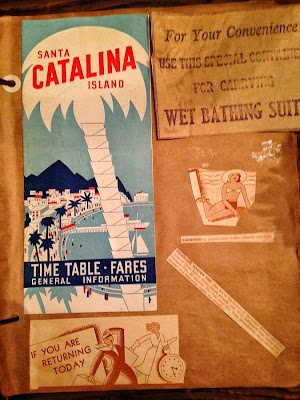 For some reason, the Johnsons stopped at places with buffalo herds, and Catalina Island was no exception, boasting it's own herd that was introduced in 1924 for the filming of The Vanishing American. The bison were left behind and ancestors of the originals still live there today, presumably boasting prominent tans and Bermuda shorts.

The page below contains a beautiful postcard from Catalina Island of a flying fish, next to which our illustrious scribe pens: Flying Fish. Catalina Island - One of the strange sights to the tourist is the Flying Fish, which at certain periods of the year are numerous about the Island. During the summer months, nightly a trip is made with a boat equipped with powerful searchlights which when played upon the water attract these fish by the hundreds.

The next to items are of Beverly Hills - the middle item actually folds out and contains postcards of celebrity homes, such as Joan Crawford, Will Rogers, Mary Pickford, Clark Gable and Gary Cooper.
The bottom postcard is that of Beverly Gardens in Beverly Hills. 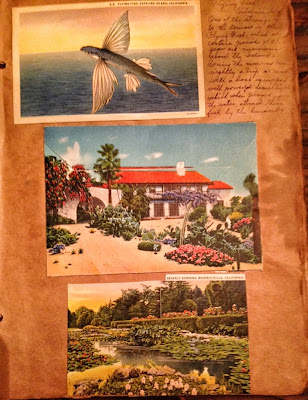 Below are a couple clippings of Long Beach, as well as a newsletter and postcard from Clifton's Brookdale restaurant.

Joan writes: A section of the main dining room at 'Brookdale, one of the world's largest and most unique. Waterfalls and cascades flow into a brook running through the room. The Chapel, Limeade Springs, Wishing Tree, Sherbet Mine and Rock Kandy Mountain are but a few features. Here guests pay what they wish and dine free unless delighted. 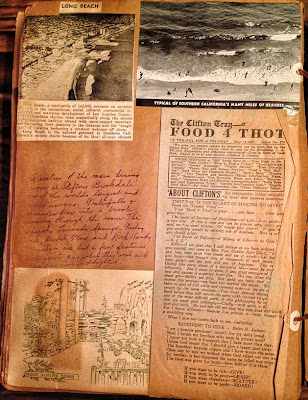 The next page contains postcards of Olvera Street - the "First Street" of Los Angeles, the Planetarium of Griffith Park, and a newspaper cutout of prolific actor Guy Kibbee. Olvera Street and the Griffith Park Observatory still exist. Guy Kibbee, unfortunately, does not. 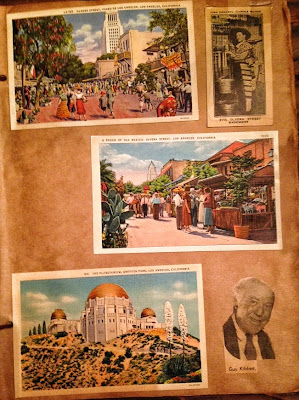 The Johnsons did a lot in Los Angeles and its environs. It must've been quite a sight for a family from St. Paul, Minnesota, circa 1937, especially when Los Angeles was such a star-studded haven. I wonder if Joan saw any movie stars while there, or if she sat at a soda fountain, hoping some casting agent would notice her and put her in a picture...

Next up, the Johnsons head to Yosemite National Park!