After finally kissing the California coast via Los Angeles, the Johnsons visit the Petersen family in Selma, California on Sunday, July 4th, 1937 for dinner. I wonder if they celebrated the 4th together, perhaps watching a fireworks display. Maybe they had fun with their own sparklers, firecrackers and bottle rockets. Anyway, the next day saw the Johnsons entering Yosemite National Park via the south entrance. The fee to enter the park was $2 at the time. 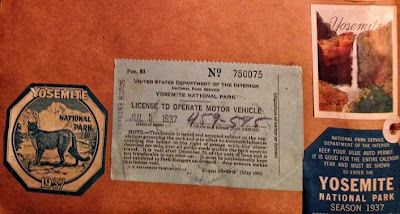 One of the highlights of the scrapbook is the Yosemite booklet pictured below. It's still in great shape and clocks in with 37 pages, plus a foldout map in the back. When I opened it up, a tiny newspaper clipping fell out about a landslide on Half Dome.

From the article: "At 4:30am last Wednesday, Florence awoke with a start. She heard a tremendous roar like that of thunder. She - and hundreds of tourists - wondered if California was suffering another earthquake. It wasn't. Half Dome, a landmark familiar to all visitors to the beauty (sic) area, had merely decided to shed part of its flat face. Ton upon ton of rock slid from the peak into the valley below."

I wonder if the Johnsons heard any of the ruckus. 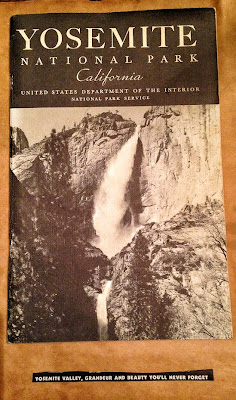 The next couple pages of the scrapbook are filled with lovely, colorful postcards. 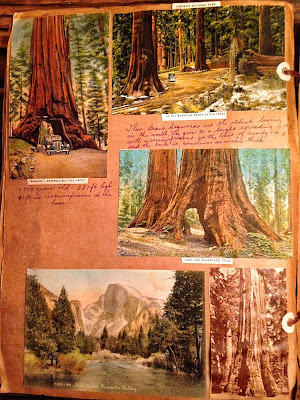 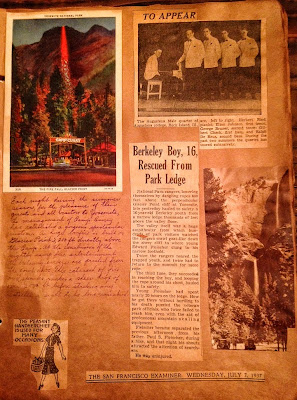 Under the postcard above, Joan writes: Each night during the summer season, for the pleasure of their guests and all the visitors to Yosemite, the management of Camp Curry have established a gorgeous spectacular custom. A huge bonfire if built on Glacier Point 3,200 ft directly above the camp. At the conclusion of the nightly campfire entertainment, the burning embers are pushed from the point above. This cataract of fire and sparks makes a sheer drop of over 2000 ft before striking any obstacles,a sight to be long remembered.

There's also an article about the Augustana Male Quartet - I'm guessing that may have been part of the entertainment? And below that, an article from the San Francisco Examiner, dated Wednesday, July 7, 1937, about a 16 year old Berkeley boy rescued from a narrow ledge of Glacier Point Cliff. From the article: "The valley itself was a huge ampitheater (sic) from which hundreds of park visitors watched the rangers crawl goat-like down the sheer cliff to where young Edward Fleischer clung to his narrow foothold." Turns out the kid was rescued unharmed.

It's very likely the Johnson family was there to witness this event. It must have been quite a nail biting spectacle to see. 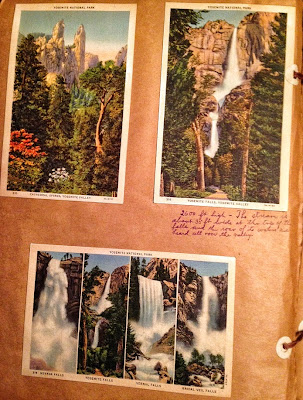 More Yosemite postcards above, of Cathedral Spires, Yosemite Falls and other waterfalls. Joan writes above about Yosemite Falls: 2600 ft high - the stream is about 35 ft wide at the top of the falls and the roar of its waters are heard all over the valley.

And then we come to the Johnson family portrait which I posted a close-up of in an earlier entry. It was taken July 6, 1937 and cost a buck. 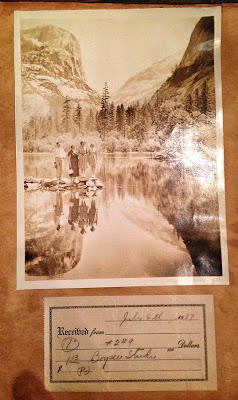 It sounds like the Johnsons had quite a memorable adventure in Yosemite. Plus, it's so cool to have an actual picture of them!


Next up: San Francisco!