I saw Star Wars when it first came out in 1977 at the Cinema Theater in Rochester, Minnesota. At least I think that was the theater's name. It was located in the corner of a strip mall near Silver Lake. I remember waiting in a long line standing under the awnings of the strip mall with my mom and dad. I was eight years old.


We barely got in for the showing we waited for. We had to sit near the front on the very left side of the theater against the wall. Not the best seats, but I forgot all about that as soon as the movie started.

I wish everyone could have that same experience as I  - and thousands of other kids - did at that time. We hadn't seen anything like it, really; that combination of cool special effects and swashbuckling. I'm certainly not the first to say that it was a touchstone moment in my life. I completely remember where I sat, the angle of the screen, the line waiting to get in. No other movie going experience has etched itself so indelibly on my brain.

I remember waiting for the sequels - for a kid my age, three years between movies was forever. It didn't seem fair that it should take so long to make a damn movie! Anyway, I enjoyed the sequels, but it wasn't quite the same magic as seeing the first. I don't remember where I sat (though I DO remember waiting in line for Return of the Jedi at the Chateau in Rochester with my older brother Scott - the lines winding around the block.) 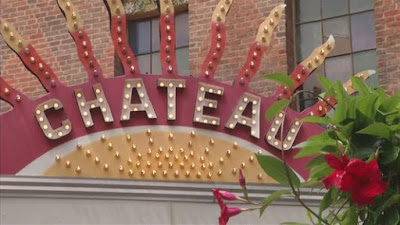 Star Wars and the first two sequels occurred at a time before multiplexes arrived - at least in Rochester. Each theater had only one screen. But it was a BIG screen, with lots of seats on a barely sloping surface. If you were a kid or short in stature and a tall person sat in front of you, you had to settle for watching the movie with the silhouette of that person's head taking up part of the frame.

Anyway, this last Saturday I took my daughter to Star Wars; the Force Awakens. Quite a difference in the logistics of watching the movie then it was back in 1977. I had ordered the tickets the night before online. I got to choose our seats. We went to the theater, not having to wait in line at all, and when we got in (with a large bag of popcorn and two bottled waters that cost $17) we found our very comfortable reclining seats. The seating is tiered in this theater - even better that your typical stadium seating - you can't even see the rows in front or behind you, because there are dividers between the rows.

While we waited for the movie, we played games on our smart phones or checked Facebook. Another guy and his kid came in and sat next to us. This guy was five when he saw the first Star Wars in the theater. We gave each other a nod - each to a fellow compadre who had shared that same touchstone all those years ago. (And no, I'm not making up the nodding part just for effect. That actually occurred.)

And once again, when the lights dimmed and that famous Star Wars crawl came on the screen, all of our surroundings disappeared. The reclining seats, unobstructed view, expensive refreshments were forgotten. I was transported once again to that feeling I had experienced in childhood. Not quite the same, but still pretty damn good.

I loved the movie. Paige enjoyed it to.

Afterward, I realized my car keys were missing. After some frantic searching, I found them in the minivan. The doors were unlocked. The minivan was still running. After three hours of idling, there was still half a tank of gas left.

Normally, I'd chastise myself for doing something so forgetful. So idiotic.

But not that day.

That day, the force was strong in me.

At least that's how I framed it to my wife.