My family took a trip to Michigan from our home in Minnesota. To save time, we took the last remaining car and passenger ferry in operation on the Great Lakes - the SS Badger - on a four-hour cruise across Lake Michigan from Manitowoc, Wisconsin to Ludington, Michigan. 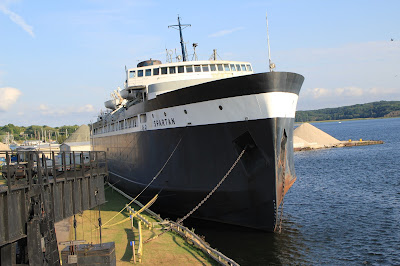 We arrived the recommended hour before departure and waited in a long line of cars, motorcycles, semis and mini-vans. Once the line got moving, it moved quickly as we passed drug-sniffing dogs and gave our tickets to the...ticket taker. The boarding of vehicles was impressive to watch, as the workers run out to the vehicles and drive them expertly onto the ship. Once your vehicle is on board, passengers don't have access to them until they are unloaded at the end of the trip. 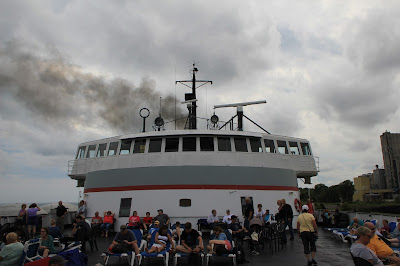 Once on board, passengers have access to two decks. There are plenty of amenities; a couple cafes, a bar, gift shops (pretty much the only place to find air conditioning) a tiny (tiny, tiny) museum, a small movie theater (two free movies shown during the voyage, a kid movie followed by a movie geared to older audiences.) There are also a couple TV lounges scattered about where you can sit and watch whatever happens to be on at the time.

Most people, however, scramble to get good seats on the decks if the weather is cooperative. It was hot when we went, and I found the best place to catch a good breeze was on the bow of the upper deck. Seats and lounge chairs were at a premium.

An available option we used was renting a state room. The cost is $50, but it was definitely worth it to us since our son has autism and often needs to escape crowds. We were assigned state room #1. Below is the cute old-fashioned key we used! 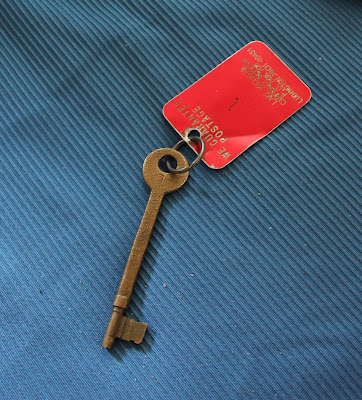 The state rooms are tiny. They have a small bed (actually two, if you want to pull the other down from the wall and have no room in which to walk.) There's also a fan right above the head of the bed, as well as a sink and toilet at the foot of the bed. The window can be opened to let in the lake air and allow you to listen to the soothing sound of the ship passing through the waves. Melissa, Zach and I took turns taking naps.

Many passengers spent time chatting, reading, or just gazing at the lake while sitting on the decks.

Speaking of reading, the gift shop contains a small selection of books. One of the books was Final Crossing: Murder on the SS Badger, by Richard Baldwin. I always find it fun to read a book that takes place in the same location I'm going to, am in, or have recently been, especially a mystery novel like this one, so I bought it.  The novel was fun to read for that aspect, though I didn't think it was very well written. The dialog, in my opinion, is amateurish, and there are many hard-to-believe leaps of logic. Still...fun enough.

Just a note to those prone to motion sickness; the ferry does not have the same stabilization features as the big ocean-going cruise ships have, so you really feel the motion of the waves, even on a relatively calm surface like we had.

Below is the pilot ship guiding us toward the picturesque marina at Ludington, MI. 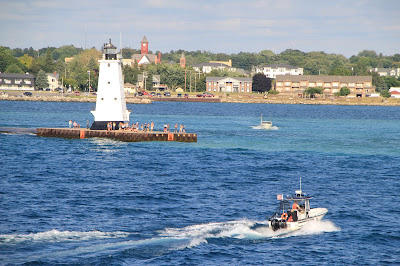 Disembarking was also an efficient and painless process. Overall, it was an enjoyable experience - one I'd recommend, especially to shave off a few hours in lieu of traveling around Lake Michigan.

Prices and booking information can be found at the SS Badger website. The site also contains many more (and better...) pictures than I took.

Here's a book about the SS Badger itself: SS Badger; The Lake Michigan Car Ferry if you'd like to learn more. It's an affiliate link to Amazon, and if you purchase it through that link, I get a small commission which helps support my enormous cocaine habit writing endeavors.

Thanks for stopping by! If you enjoyed this article, feel free to share!