On our recent trip to Michigan late in August, one of the highlights was taking a Sunset Boat Cruise along the Pictured Rocks National Lakeshore. The tour takes off from Munising, Michigan and lasts about three hours. It's a bit pricey, but I thought well worth it.

The boats fill up quickly, but good views can be had all around. You can get up and walk around and even hang out on the open-aired back deck. There's a restroom on the boat, and they sell soda and water if you find yourself thirsty.

The first half hour of the cruise is simply getting out to the Pictured Rocks, and on the way you cruise past Grand Island, on which is the cool old Grand Island East Channel Lighthouse, first operational in 1868: 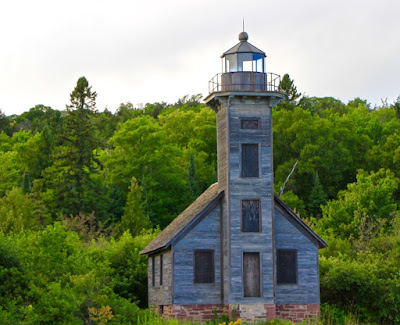 As the ship's captain and crew take you out past Grand Island and into Lake Superior - slipping in corny jokes with the narrative - you soon start to see how the Pictured Rocks National Lakeshore got its name. 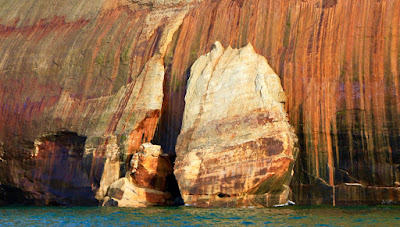 There were caves and grottoes galore. 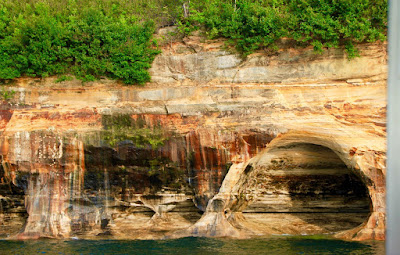 The colors come from water seeping through various minerals contained in the sandstone cliffs. Iron produces the reddish colors. Copper creates the green. I love the palette of the picture below. It looks like someone dipped a giant paint brush in various paints and made bold up/down strokes along the cliff wall. 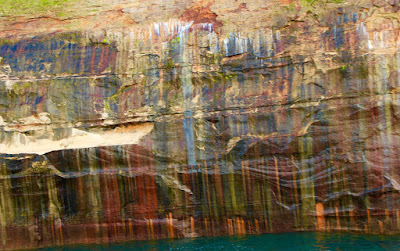 My wife and I kept mistakingly calling the place Painted Rocks National Lakeshore instead of the proper Pictured Rocks... 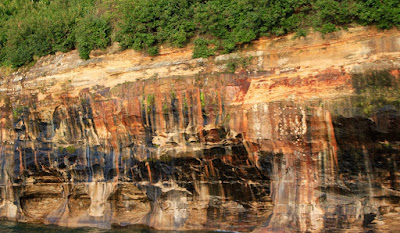 The black and white colors below were created by water seeping through manganese. 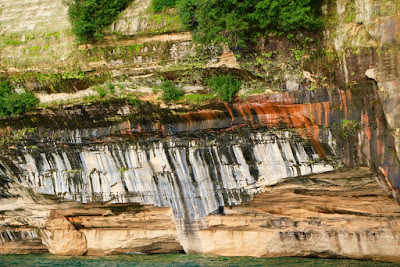 There are also a number of cool rock formations. Though you can't really see it in my picture of Chapel Rock below, the tree on top of that rock has a huge root that juts through the air to the mainland like an extension cord, where it is embedded in the earth. 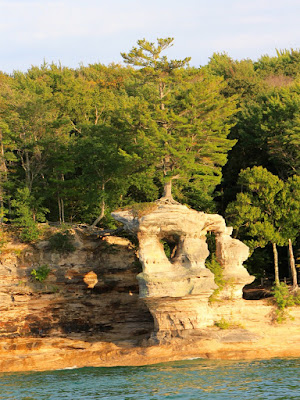 On the way back, the sun began its descent (thus the name 'Sunset Tour'), and people stood on the back deck of the ship to watch. 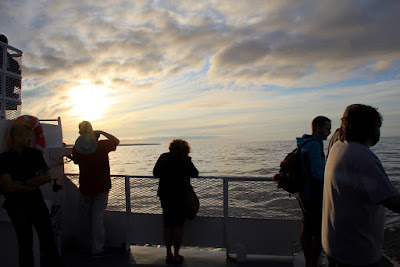 The clouds were incredible that evening. 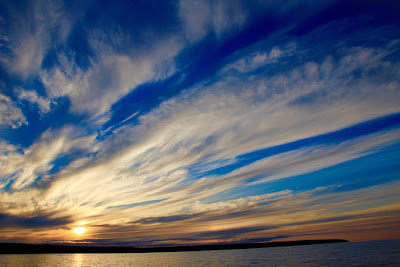 As the boat headed back to Munising, the sun flared into spectacular molten gold. 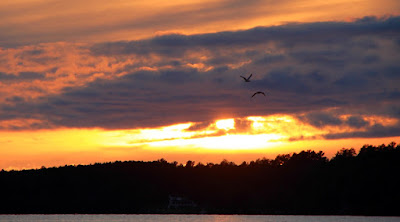 I highly recommended this tour for all ages. And if you go, make sure to bring your camera.

Another option for the more adventurous is kayaking the lakeshore. There are companies in Munising (like this one and this one) that will give you a ride out to the main area and drop you off, then haul you back to town when you're done.

If you're interested in books about Michigan's Pictured Rocks, here's one by well-known photographer Craig Blacklock, as well as one by William Blewett which is more about the geology of the area. Clicking on either one will take you to their respective Amazon pages: