My Grand-Uncle was Ralph Kline who lived to be 100 years old. He was an incredibly kind man - fought in WWII, and lived in Minneapolis with his wife, Dorothy (who now lives in Rochester, MN at a feisty 98!) One of Ralph's grand-uncles was an artist named James William Pattison. He led quite a fascinating life, and there's a great write-up about him here, if you'd like to read it.

Here's a portrait of him:

Anyway, we've had this painting done by him that's been in the family for many, many years, and now it's been passed to me. Although the painting isn't titled, I found some other paintings of his online at various museums and auction houses, and some of them feature his daughter, Penelope, whom I believe is also the subject of our painting. So for now, I'm calling it:

Penelope in a Field with Sheep 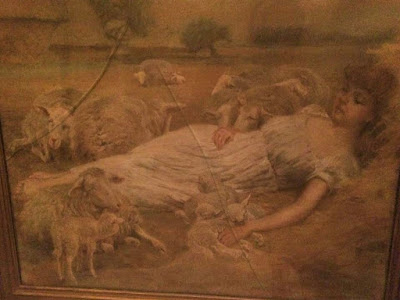 The image is approximately 19" x 24", and the glass in front of it got cracked, but the painting itself appears not to have suffered. I had a hard time getting any good shots of it due to reflection, etc - plus I used my iPhone to take the pictures, which don't do it justice. I believe the medium Pattison used here is gouache, the definition of which is: "a method of painting using opaque pigments ground in water and thickened with a gluelike substance."

The next few shots are close-ups I took. 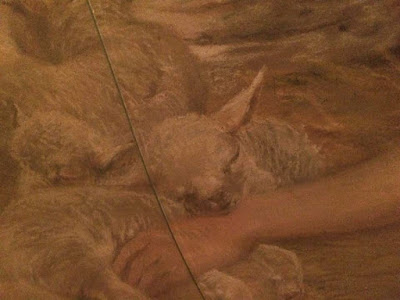 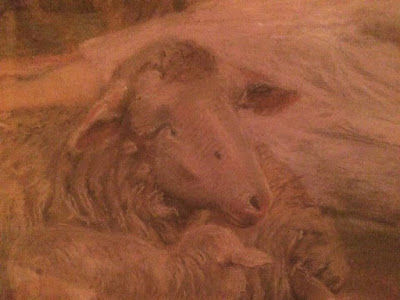 Anyhow, it was fun learning of this grand-uncle of a grand-uncle who was a semi-famous painter and art reviewer! He even exhibited in the Chicago World Fair - which the excellent book Devil in the White City is about. (Not about Pattison, of course, but...you know what I mean!)