The Warden's House and Hair Wreaths

I went around to some indie bookstores today to see if they'd consider carrying Paige's Taco the Sled Dog. They pretty much all agree to take a copy to look over. Hopefully they will get back to us, but I probably would've done better just sending an email and asking if they'd like a pdf copy to examine. I spent about five hours tooling around and traveled 120+ miles.

Anyway, I drove up to Stillwater as part of my jaunt and toured the Warden's House Museum - part of the Washington County Historical society. It was an interesting tour. 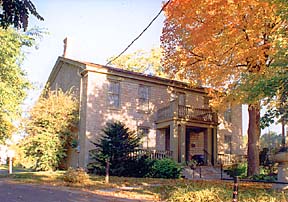 It was built in 1853 - the old Stillwater prison was right next to it, although that hasn't been there for a long time. One of the interesting things I saw on the tour was a hair wreath. It looked something like this: 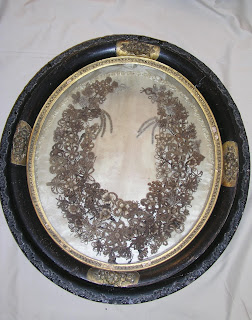 When a loved one died in the 1800's, before photography was a big thing (or a thing at all) a way to remember the deceased was to shave off their hair and use it to make a wreath. It was typically left open like the one above to symbolize letting the loved one ascend to heaven.

Another thing in the museum was a human bit, used on prisoners to force compliance. Unfortunately, I didn't have my camera, and couldn't find a picture on the 'net, (although I did find images of the Scold's Bridle - a torture device mainly used in medieval times - which was really nothing like what I saw at the Warden's House but is interesting and macabre nonetheless.) The bit at the museum looked a lot like an old retainer, made of a thick metal wire that went in your mouth that was held in place by a leather strap which tightened around your neck. The strap would be tightened until the prisoner calmed down. Nice, huh? The practice stopped in the late 1800's or so - the last warden was very much into prison reform and stopped a lot of those cruel practices.

I also learned that the first pop-up electric toaster was invented by a guy named Charles Strite, who worked at a manufacturing plant in Stillwater - he  was tired of the burnt toast served in their cafeteria!