Since today is Halloween, I thought it would be great to feature an author whose work wonderfully invokes the season. And Benjamin Kane Ethridge is just that guy! He won a Bram Stoker Award for his novel Black & Orange, and is still writing about those things which elicit scares, goosebumps, and various forms of hand-wringing. I'm very happy to have Ben on board today to answer my five questions! 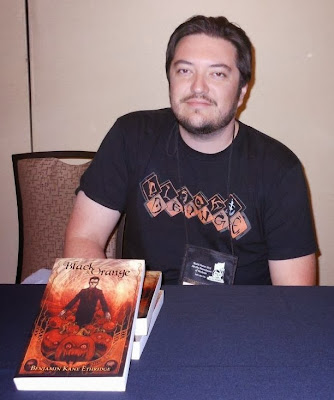 I have two books that came out this month, both of which are related to my debut novel Black & Orange. The first is a chapbook containing two short stories and a novella, and it's called Reaping October. This beautiful little book explores the Black & Orange universe more, letting the reader know extra background to Chaplain Cloth, the Church of Midnight and Morning, and even the origin of the first Nomads. 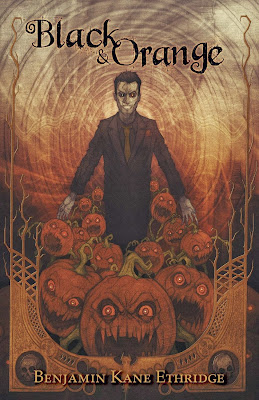 Of course the second book out this month is the sequel to the first installment in the series. This one is entitled Nomads. I'll let the back cover description do the honors:

A decade has passed since the events of Black & Orange and the Church of Midnight has almost been single-handedly decimated by the Nomad named Patty Middleton.

After a series of mass executions, she demands to get answers from the mysterious Messenger, and is tireless in her pursuit, despite the protests of her partner. While Patty seems closer to discovering the identity of the Messenger, she has also developed a dangerous condition with her power to create the invisible fields known as mantles. This condition could kill her or people around her, just when she needs to focus on her enemies, who now include a government group known as the Office of Arcane Phenomenon.

Meanwhile, Chaplain Cloth, disappointed and impatient with years of failing, seeks a rumored pair of columns that will hold the gateway open forever. Patty Middleton is more than a match for him though, and half of his Church is gone. If he doesn’t make his move now he might not get another chance for thousands of years. There’s no room for error. He has to get those columns and sacrifice the Heart of the Harvest.

But this year the Heart isn’t in our world.

This time around, the Nomads and Chaplain Cloth are spending Halloween in the Old Domain. 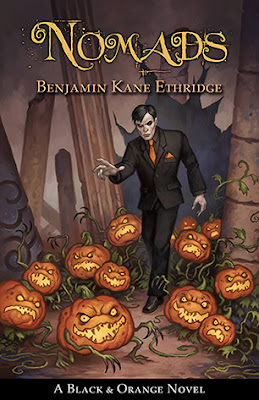 This is always hard for me because I usually have favorite authors per genre. Thomas Ligotti had a profound impact on me for the horror genre. His Shadow at the Bottom of the World was a collection that had me wrapped around its dusty, plastic mannequin finger.

Being in the moment. When the act isn't work, I'm very happy. 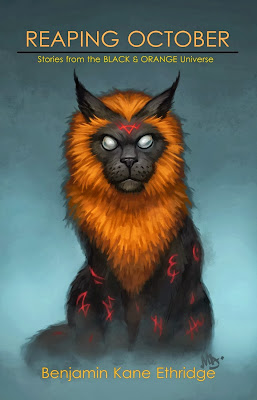 I was at the World Horror Convention in New Orleans recently and I had some older fellow, who was a newbie writer, explain to me that recently he was really into Jack Ketchum and Benjamin Kane Ethridge. I'm notorious for putting my name badge on backwards, or forgetting it entirely, and he didn't know who I was-- but at the time, I thought he did and he was putting me on.

I told him, "Ethridge? Why in the hell would you read that shit?" Seeing him frown and tilt his head, he then said, "Are you kidding? Have you read any of his stuff?" And I awkwardly replied, "I can't even remember the book. It was terrible." And I nervously laughed, wondering if I was going crazy and how deep this lie would go. He had to be messing with me!

"Well what was the book about that you read of his? What did the cover look like? I've read all his books and I really enjoyed them all."

Anyhow, I have to say I was very flattered and when I explained to him I was kidding and that I was the writer in question, he didn't believe me at first. I had to bring up Wikipedia on my phone and show him my picture. He then went to his room and brought down every one of my books to sign. That was pretty neat, I must say.

From Dennis Etchison: "If you're having trouble in a part of your story, it means you messed up somewhere along the way, got your plot pointing in the wrong direction. It's your job then to go find where the story got off track. That's how you effectively end writer's block or any major difficulties with your stories."
Posted by Joel Arnold at 10:46 AM