The Johnsons took Hwy 24 out of Colorado and hooked up with Hwy 50 on their way into Utah. They took a detour off of 50 and headed north to Salt Lake City! Looks like they stayed at the Newhouse Hotel. 400 rooms with 400 baths! 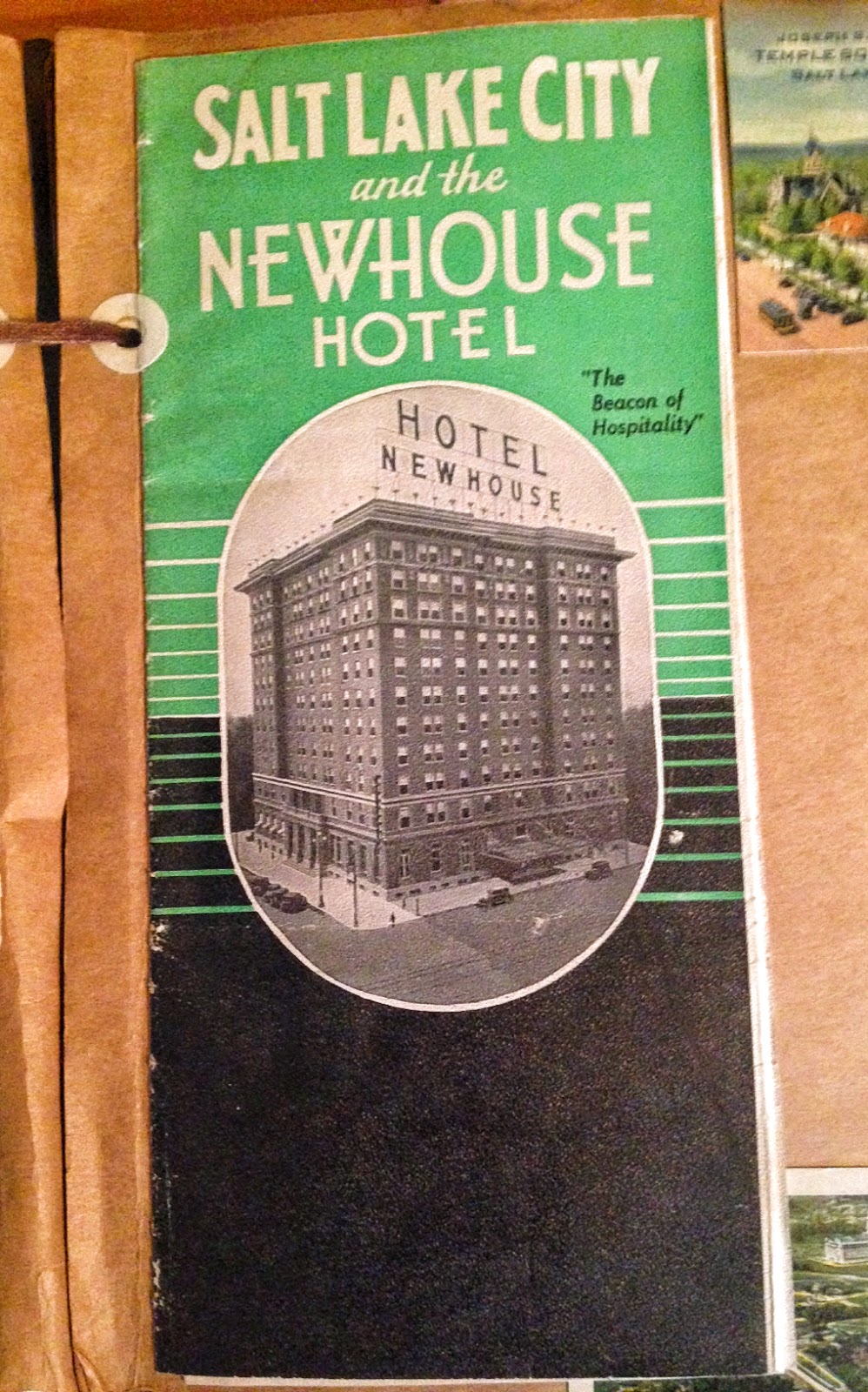 Here's some detail from inside the brochure. Look at those prices! 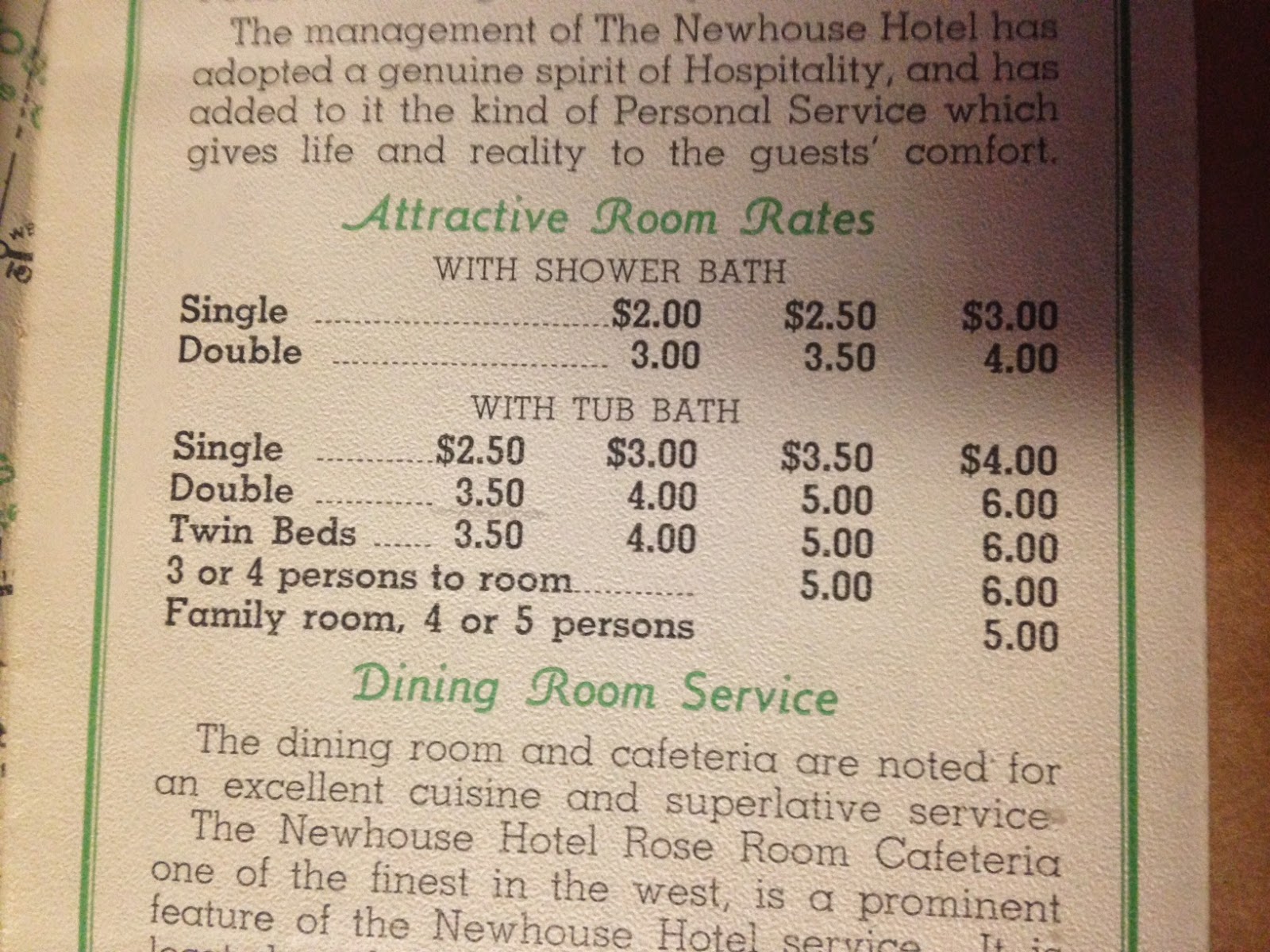 The Newhouse Hotel was demolished on June 26th, 1983. Here's an interesting article on its demolition, with a little history thrown in.

The Johnsons seemed fascinated with the Mormon religion. Perhaps they were Mormon themselves? Hard to tell, but they devoted four full scrapbook pages to Salt Lake City and Mormonism.


I photographed each of the next three pages in two parts to get a little better detail. That's why there's a small space dividing them. 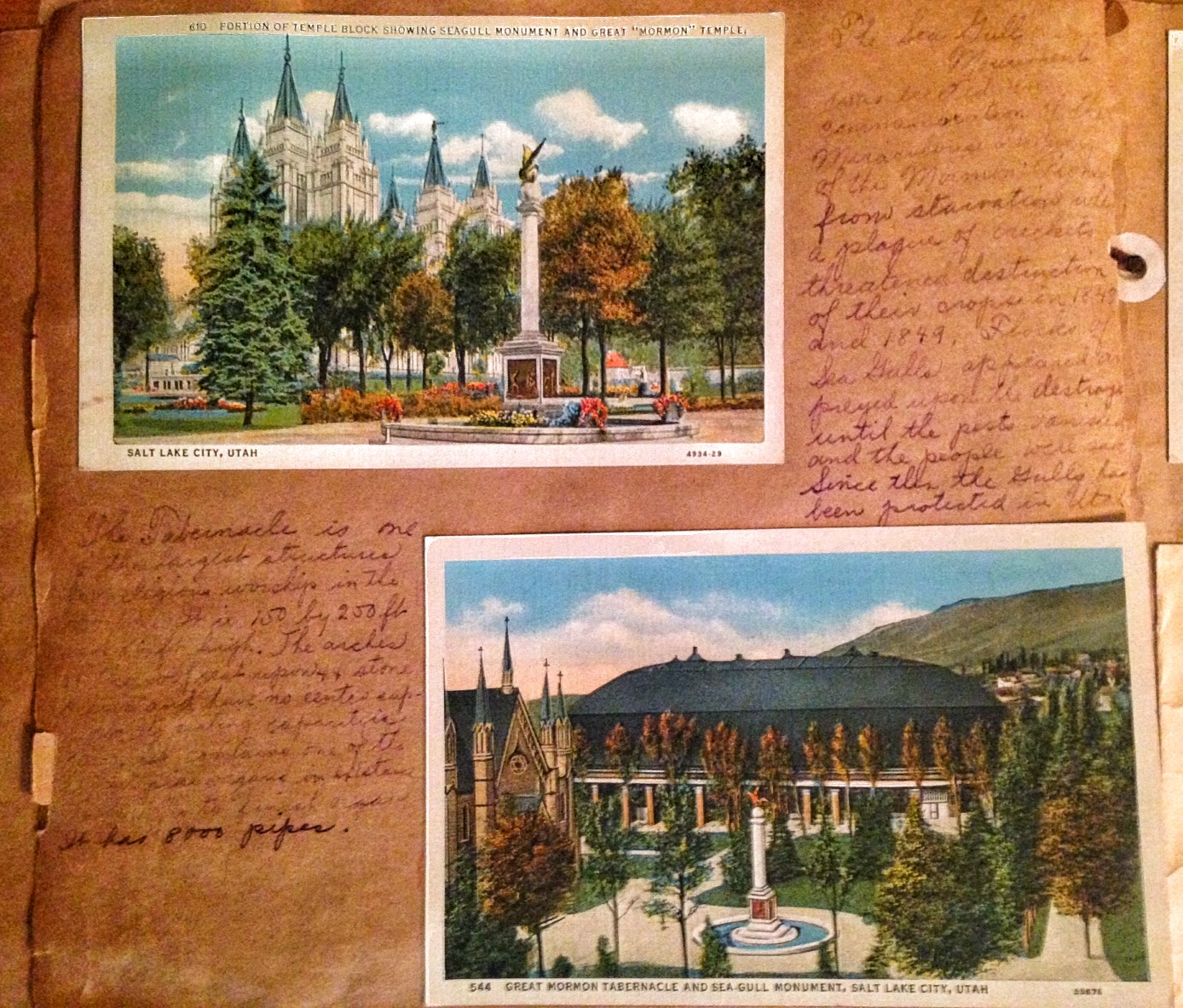 On the above page, our scrapbooker wrote: The Sea Gull Monument was erected in commemoration of the miraculous delivery of the Mormon people from starvation when a plague of crickets threatened destruction of their crops in 1848 and 1849. Flocks of Sea Gulls appeared and preyed upon the destroyers until the pests vanished and the people were saved. Since then, the Gulls have been protected in Utah.

The Tabernacle is one of the largest structures for religious worship in the world. It is 150 by 250 ft and 80 ft high. The arches of the roof rest upon 44 stone piers and have no center support. Its seating capacity is 8,000. It contains one of the finest pipe organs in existence. Took 7 yrs to finish organ. It has 8,000 pipes.

This construction commenced Sept. 1, 1865, finished 1867. The roof, the principle portion of the building rests on 44 piers, 3 ft thick, 20 ft high and 9 feet wide. Each section has 9 pillars from which 48 foot arch is sprung. 13 arches spring at each end from piers standing on end. The arches are of a lattice...

That last paragraph was particularly hard to read, and I couldn't decipher the last sentence. I also may have made a mistake or two in the translation.

Below is a postcard titled 'Tabernacle Organ and Choir; Great Mormon Tabernacle, Salt Lake City, Utah.' Below that is a program of the recitals of that day, next to a booklet about Joseph Smith. 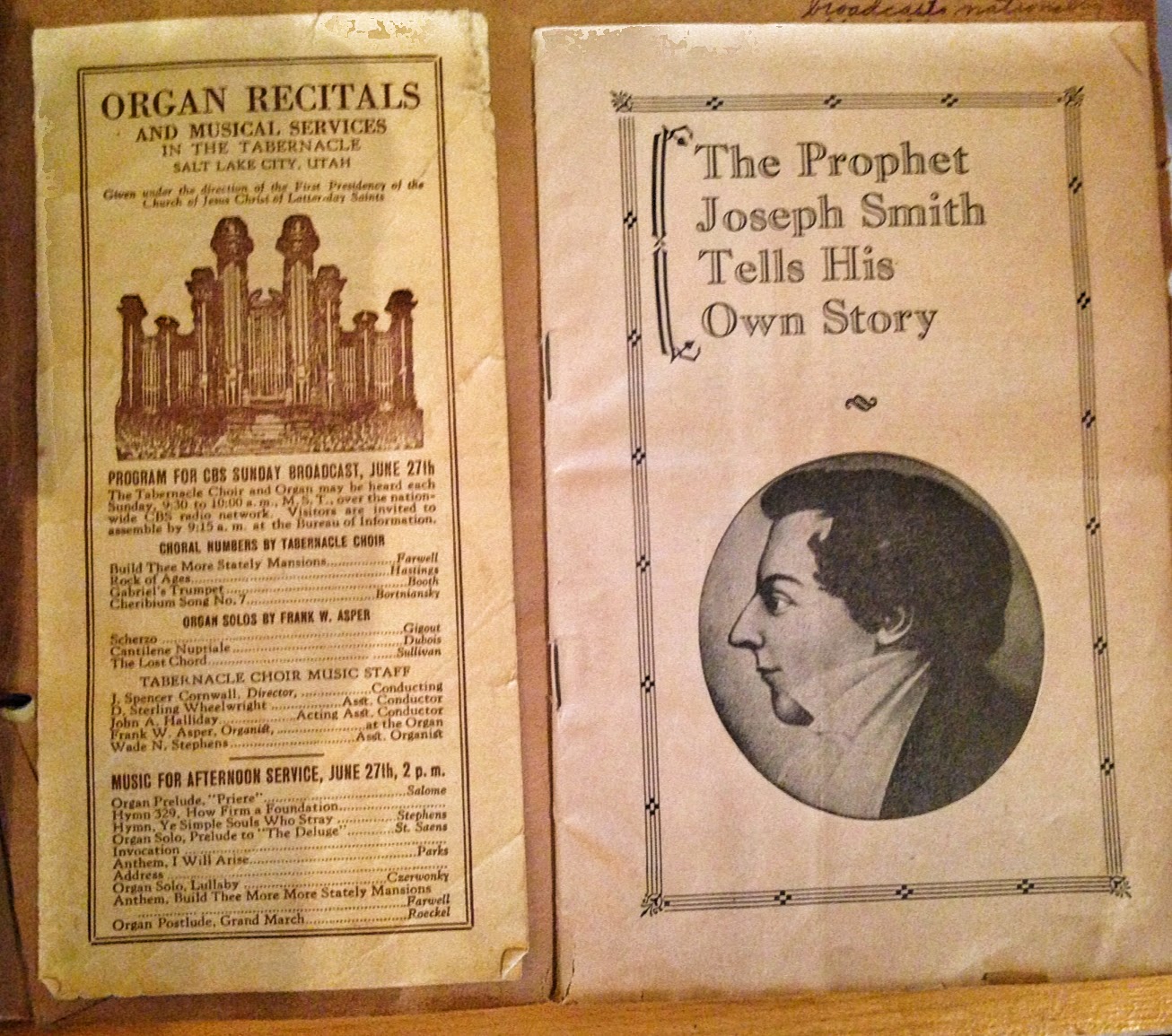 Written next to the postcard above is a continuation of the previous page's entry, so there's a tiny gap in the text due to its unread-ability: ...of national renown was originally built 65 years ago by Utah artisans. It was thoroughly rebuilt and enlarged by Austin Organ Co. of Hartford, Conn. and stands as the peer of, if not superior to any pipe organ in the world. The Tabernacle Choir is an unpaid organization of about 300 voices, providing music for each Sunday service. The choir also broadcasts nationally from this building.

On the page below is a pamphlet titled The Plan of Salvation by Elder John Morgan. To the right of that are a couple newspaper clippings about the Great Salt Lake. On the bottom right was an Ernest Hix Strange as it Seems newspaper clipping (added on March 27th, 1946, as per the handwritten note next to it) and to the left of that is a business card of one Dr. A. R. Proelss, Optometrist. I wonder what the story is behind that? Was it someone they met and made friends with? Did one of the Johnson's break a pair of glasses and needed a new pair?

Ah, at the bottom of the card, it looks like the good Dr. works at an optical lab in Seattle. Perhaps he was simply someone they ran into got along swimmingly with. 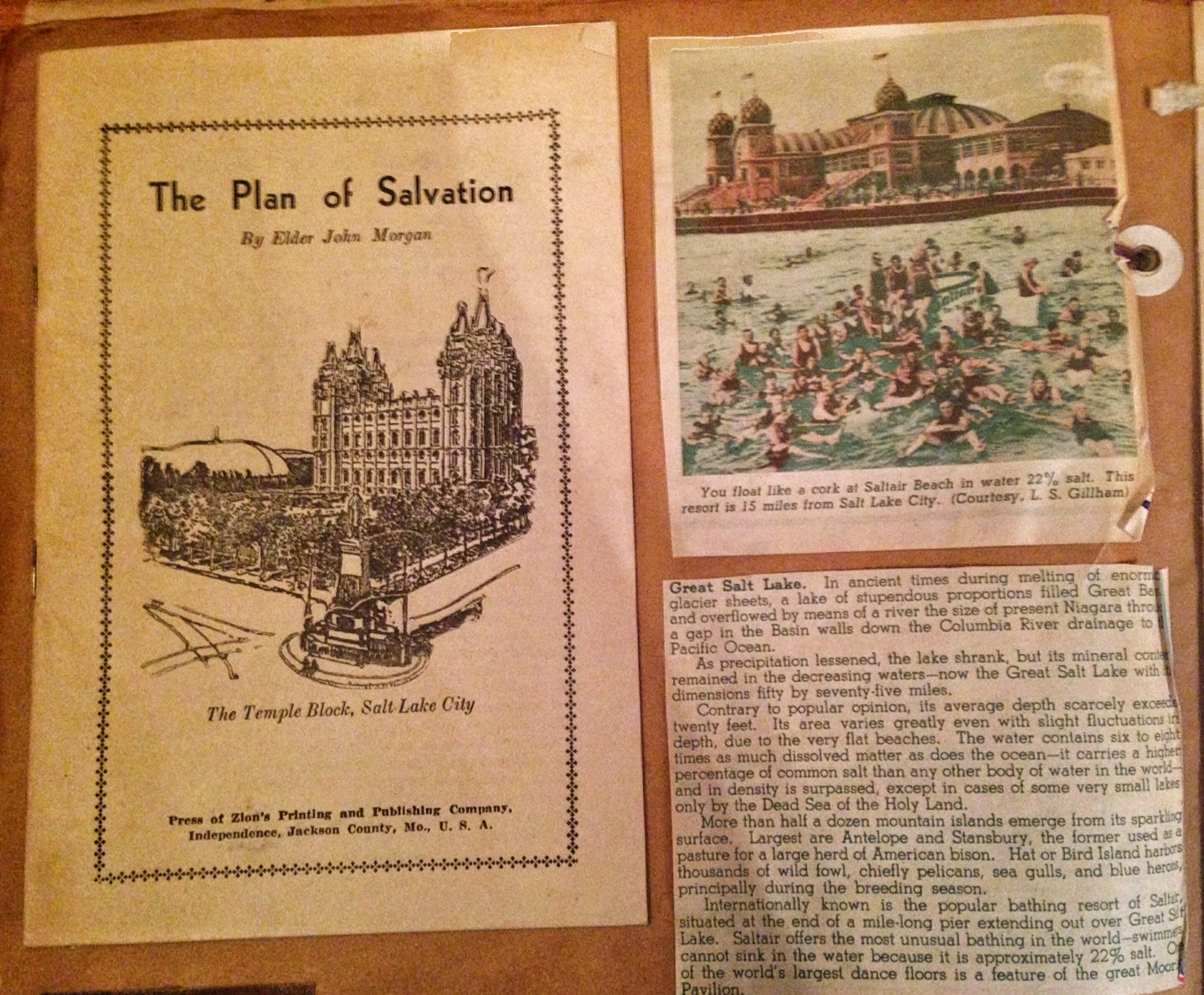 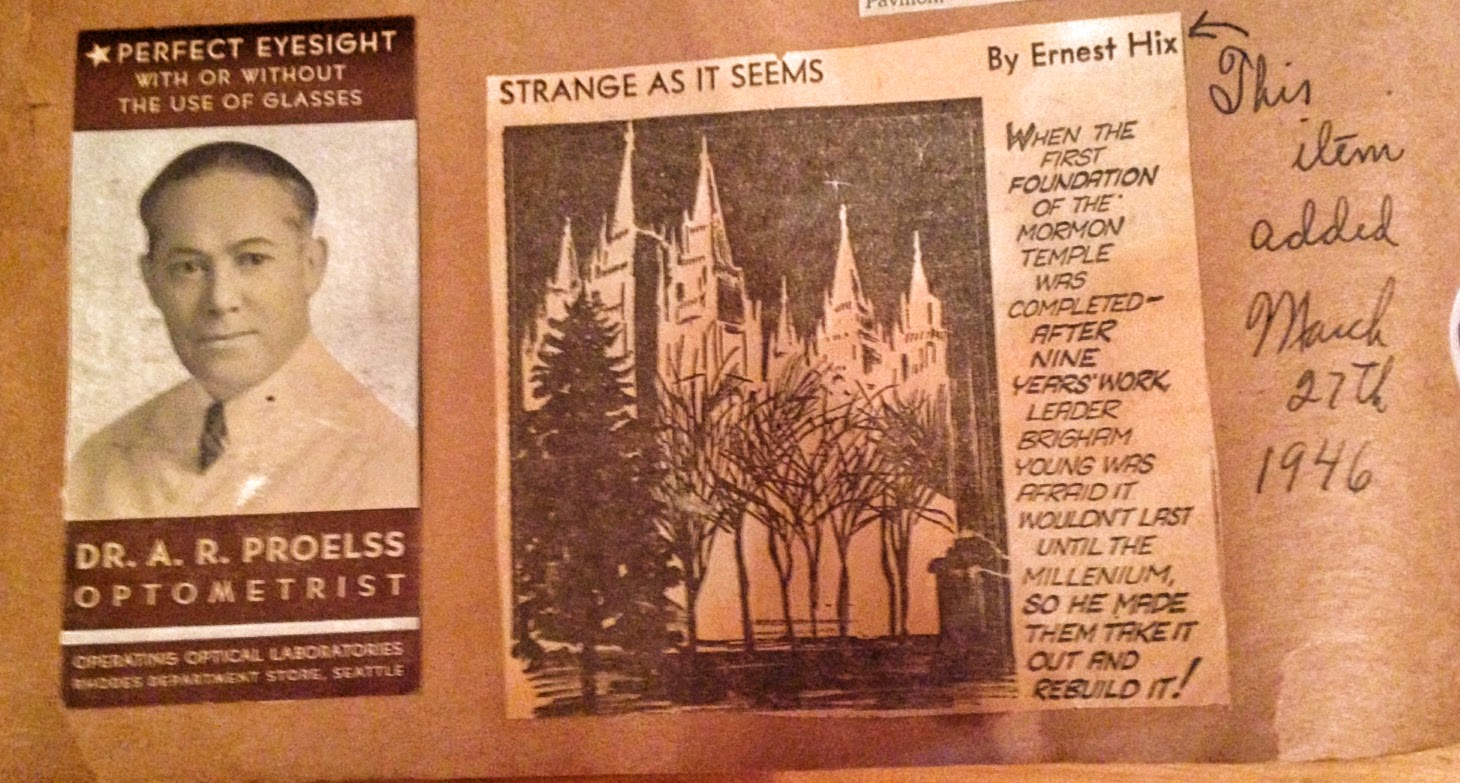