My Grandpa Walter J. Arnold was an air raid warden in East Los Angeles during WWII. He passed away in 1976 when I was only eight, so I didn't know him very well, other than that he had a hearty laugh and was really tall (6'4"). He also liked his fried chicken from a place called Chickenowski's, which was across the Mississippi somewhere in Wisconsin. (He lived in Wabasha, MN, when I knew him.) He was a nice man, and when we visited, he always gave me a quarter to run down to the Ben Franklins for candy.

He worked in the milling industry most of his life - at places like Big Joe Flour in Wabasha, and Mother Hubbard in Mankato. He worked at a mill in L.A. too, but my folks can't remember which company it was. I remember he had an inhaler he'd use every so often, and I wonder if it was from all the flour dust he must've inhaled over the years. He'd also been a two-pack-a-day smoker from an early age (elementary school) until his early 50s, when he quit cold turkey. I'm sure the inhaler could've come from that, as well.

Walter ran away from home at the age of fourteen, and had no love for his father. Apparently his dad would take all the money Walt earned on a paper route and not let him have any of it. But so, he ran away from home, and drove a taxi in Faribault at the age of sixteen. At some point, he met the love of his life, Laura, and they eloped. They adopted my dad when he was 19-months old from the Owatonna orphanage.

Anyway, a number of years ago, I found a leather folder of Walt's at my parents' house that contained a bunch of his air raid warden materials. It's pretty cool to read through; from information about victory gardens, to different types of incendiaries and how to treat wounds from various chemical weapons, etc. Also info on the proper air raid warden attire and what his duties were. There were also some ration coupon books of my dads', who was between 4 and 7 when they lived in California.

Here's a picture of Walt (in his early 40's here) and my dad looking mighty dapper in East L.A. 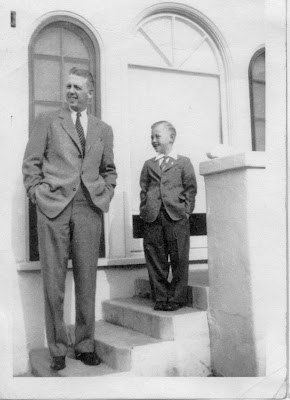 Here's one of my dad's war ration books. I love all the info on it - his age, their address at the time...I wonder if that same house still exists. 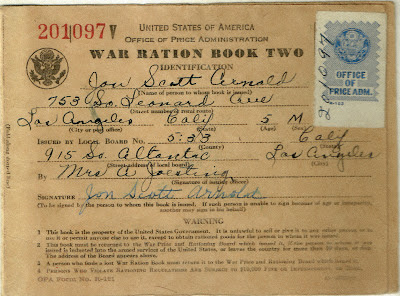 Here's what Walt would've handed out to civilians in his assigned area, which typically consisted of a few square blocks. My dad says a nickname for the air raid wardens was 'blockhead': 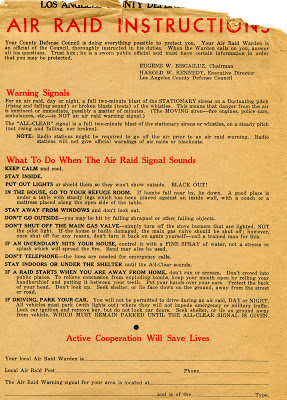 Here's a sheet that lists some of the air raid warden's duties: 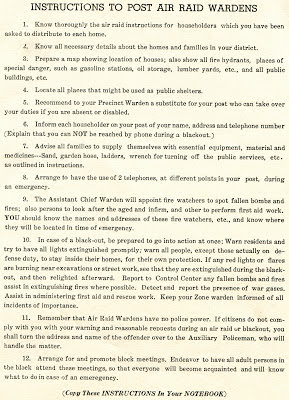 In case there had been an actual raid, or incident, here's the form he would've filled out: 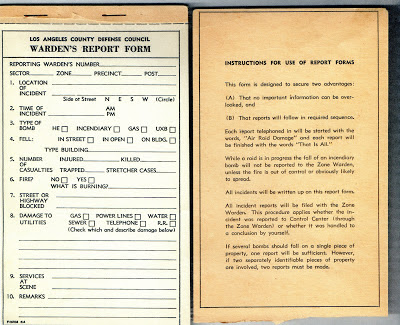 Also included in Grandpa Walt's air raid warden folder were news bulletins from the East Los Angeles War Council like the one below. They really bring the humanity into the picture. They talk about upcoming dances, and folks who are moving away or coming back from the war, etc. They are typically positive and upbeat, with a bit of humor thrown in here and there. 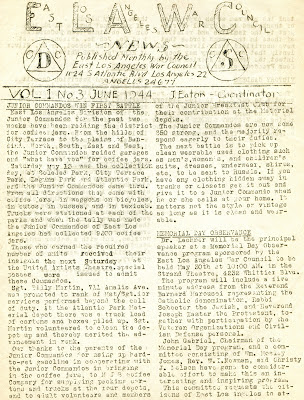 There are a lot of other items in his air raid warden folder - too many to include in this post. But looking through them certainly inspires the writer in me to use them to concoct a story at some point that takes place during that time, with an air raid warden as the main character. Perhaps a mystery, since it was the warden's job to know everyone in his neighborhood, and to walk his beat, making sure everyone was in compliance with the black-out rules. Surely he'd come across something out of place...