Portrait of Jennie & The Picture of Dorian Gray

At 2014's CONvergence - whose theme was 'A Midsummer Night's Dream' - I watched two movies that were early examples of using color in otherwise black & white films for an interesting effect. 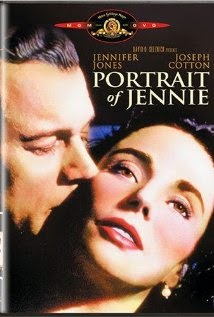 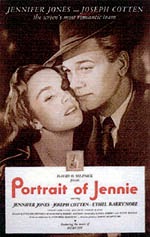 The first was Portrait of Jennie, 1948, starring Joseph Cotton as a down-on-his-luck artist, trying to eek out a living in depression-era New York City. He lacks inspiration until he meets a young girl in central park named Jennie. They strike up a casual friendship, and he sketches a picture of her. There's something strange going on, however; each time they meet, Jennie has aged, even though it's been only a matter of weeks or months between meetings. Eventually, her age catches up to his, and they fall in love with each other. He paints a beautiful portrait of her which catches the attention of the art world, and he becomes successful. More happens afterward, which I don't want to give away, but I really enjoyed this movie. Though most of the movie was in black & white, the last part of the movie suddenly becomes tinted green, then tinted red, and then when the full portrait is revealed in a museum years later, it's in full technicolor. (And for some interesting trivia, one of the teenagers looking at the portrait in this last shot is Nancy Davis - better known as Nancy Reagan.) This film also stars Jennifer Jones (as Jennie) Ethyl Barrymore and Lillian Gish. 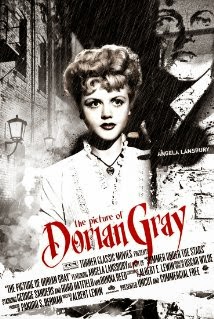 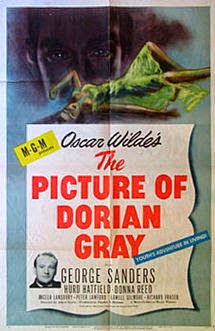 Next was the classic The Picture of Dorian Gray, 1945, (based on the Oscar Wilde novel) starring Angela Lansbury, Donna Reed, Peter Lawford, George Sanders and Hurd Hatfield (as Mr. Gray). It also used a similar technique, in that the movie is filmed in black & white, but they use color when showing Dorian Gray's portrait. At first, they show the original portrait in color - the portrait of a gentleman - then later reveal the revolting image of Dorian as his soul has been nearly lost to corruption. It is this image, painted by Ivan Albright, that caused this fantasy movie to be labeled a horror film by many. I can see how springing this monstrous color painting near the climax of an otherwise black & white film must've been quite a shock to audience members. (If you'd like to see Ivan Albright's famous portrait of Dorian that caused quite a fright, you can see it here. However, you may want to watch the movie, first, and experience it that way!)

I highly recommend seeing both movies, especially one right after the other!

Thanks for stopping by.

Email ThisBlogThis!Share to TwitterShare to FacebookShare to Pinterest
Labels: movies, Portrait of Jennie, The Picture of Dorian Gray