Alden, Velma, Joan and Marilyn Johnson entered the northeast corner of Colorado in the last half of June, the kids perhaps seeing the Rocky Mountains for the first time in their lives. I grew up in Minnesota, as did the Johnson kids, and I remember seeing the Rockies for the first time. I wonder if it was the same for them. Did father Alden or mother Velma see them first through the windshield of the LaSalle, pointing to them in the distance, saying, "Look, kids - the Rockies!" Did Joan and Marilyn's eyes widen, jaws drop a bit like mine when I first saw them?

The air feels different in the mountains. It feels cleaner. Fresher. Did their ears pop as they climbed in elevation? Did they grip the door handles tight as they drove close to the edge of mountain switchbacks?

From the next page of the scrapbook, there are postcards of the Chief Hosa Lodge and the State Capitol in Denver. Located in Genesee Park, the Chief Hosa Lodge opened in 1918 and boasted "America's first motor-camping area." It was designed by Jacques Benedict, built of timber and stone from the surrounding area. He named it after a Southern Arapaho leader. Like Shady Bend, this place also boasted its own bison herd, some of which were transported from Yellowstone in 1914. The lodge and bison herd are still there. 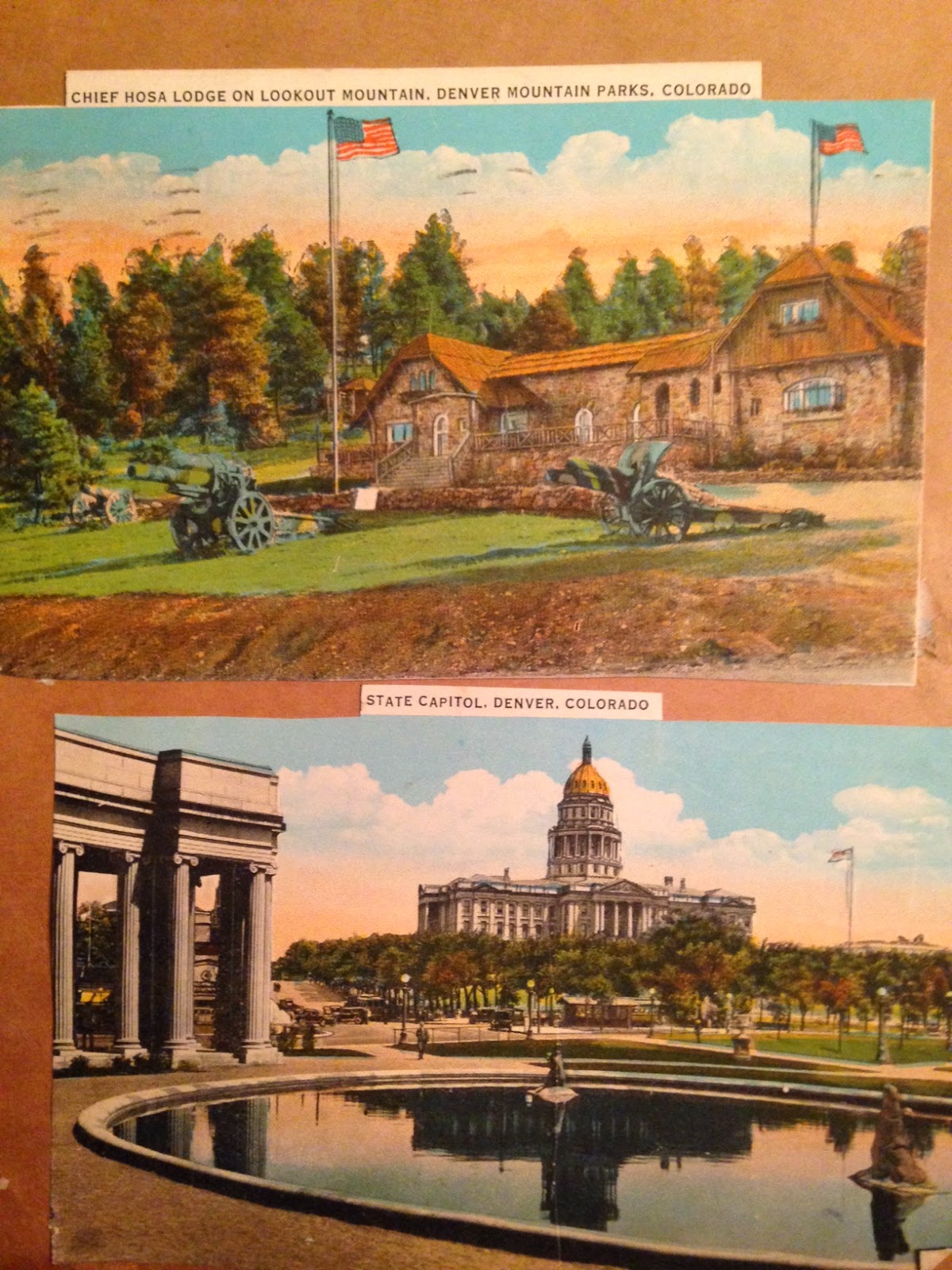 The Denver State Capitol is still there, too. Its dome is plated with actual gold. One of its steps is measured to be exactly a mile above sea level:

The next postcard in the album is labeled 'Famous Scenic Glenwood Canyon': 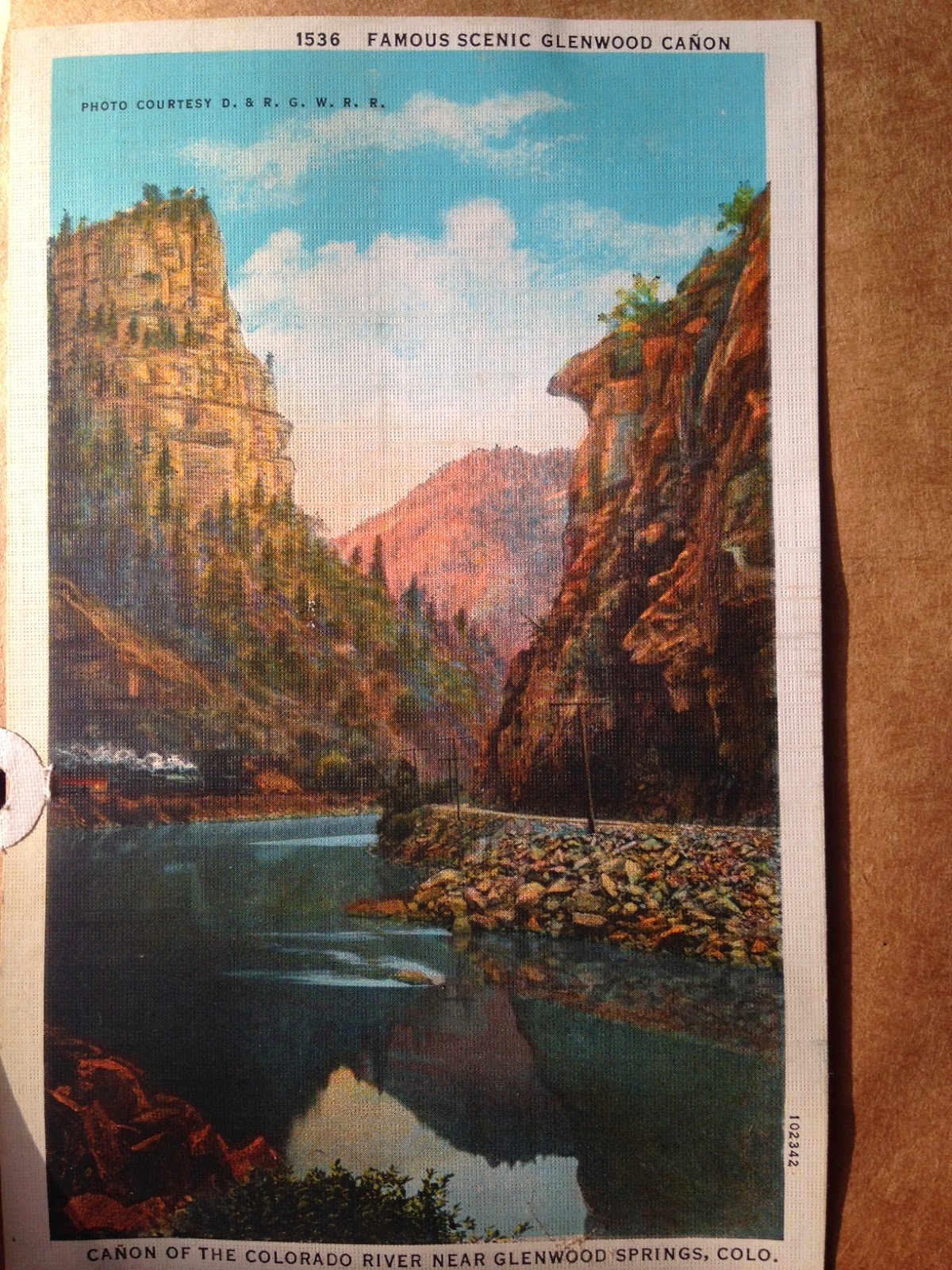 Glenwood Canyon is a sixteen mile stretch of Rocky Mountain goodness complete with bears, coyotes, marmots, bighorn sheep and other critters. In the early 1990s, the roadway of the canyon went through an extensive redesign, adding two more lanes, more visitor centers, and other amenities. Though a clean bathroom is always appreciated, I envy the Johnsons and others who traveled the canyon before it was so modernized.

The next page of the Johnson scrapbook is dedicated to Balanced Rock located in the Garden of the Gods. Apparently Balanced Rock, while still there, has since been cemented into place.

I am unfamiliar with the comic strip below the postcard. If anyone knows the name of it, let me know! 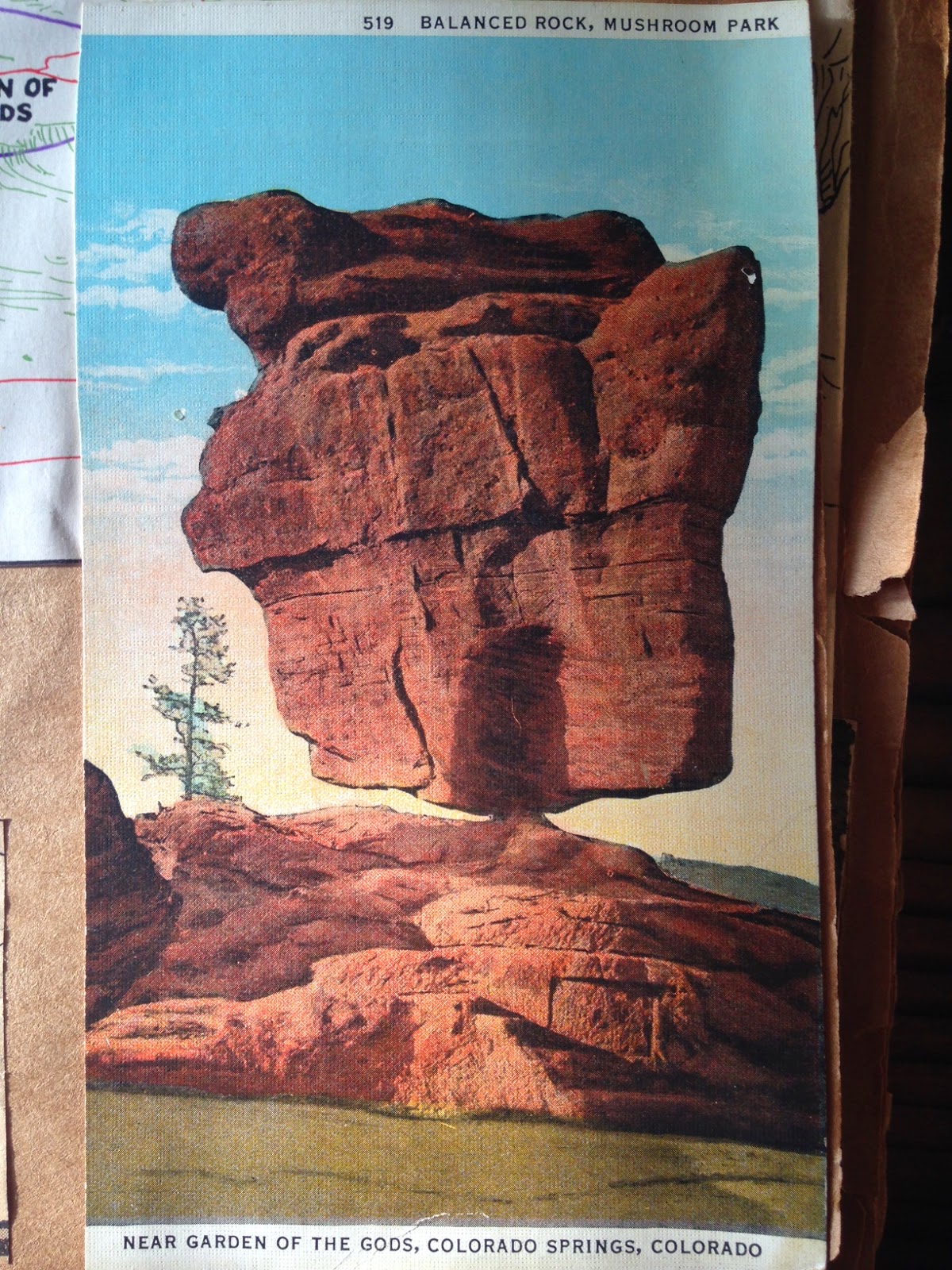 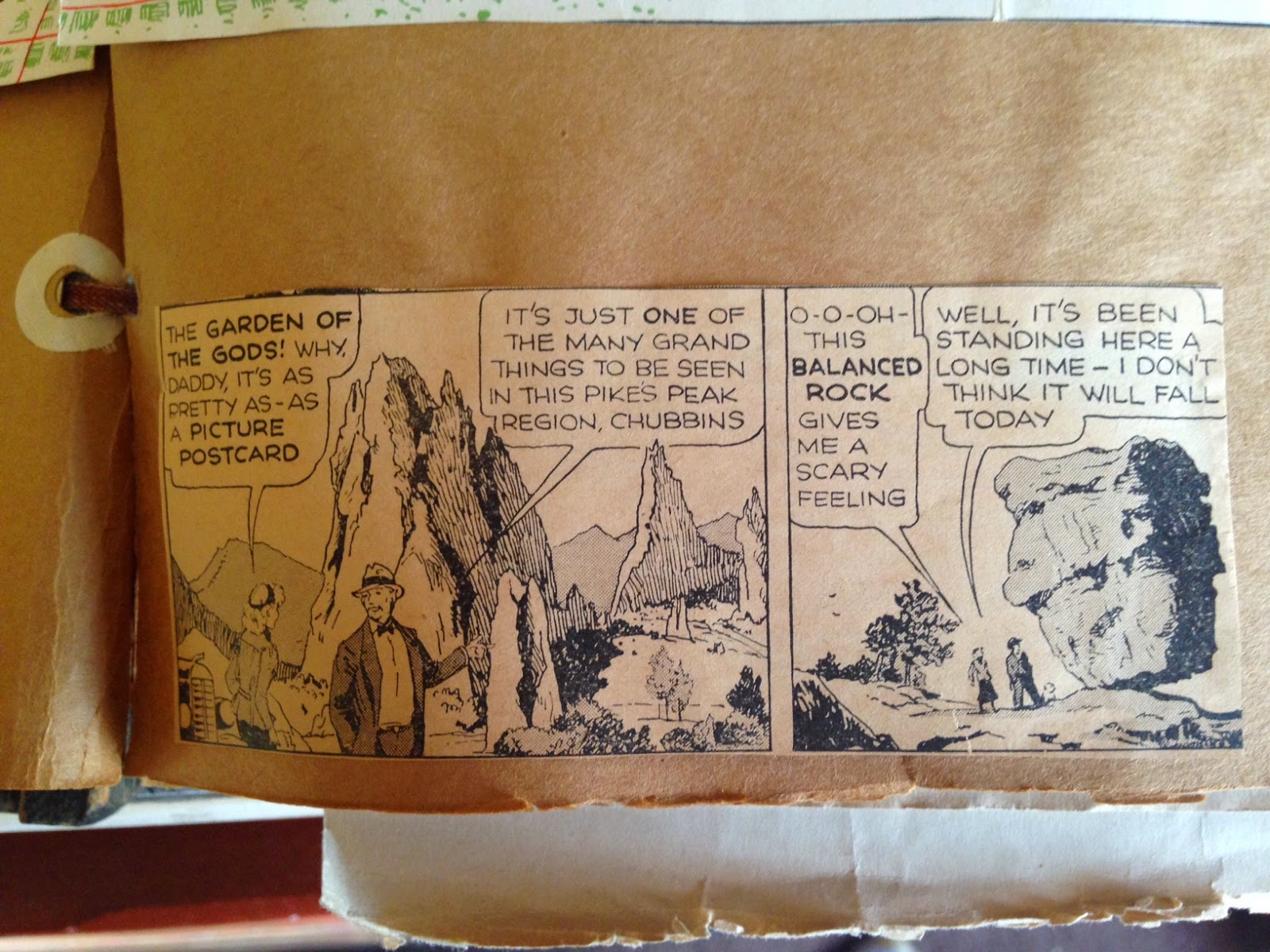 Turning the page...we have a natural rock formation called "Kissing Camels" - the top postcard of the three below. Kind of hard to tell from the picture, but the camels are locking lips on the top ridge, near the middle. This formation is also located in the Garden of the Gods - not to be confused with the Compost Heap of the Lesser Minions. 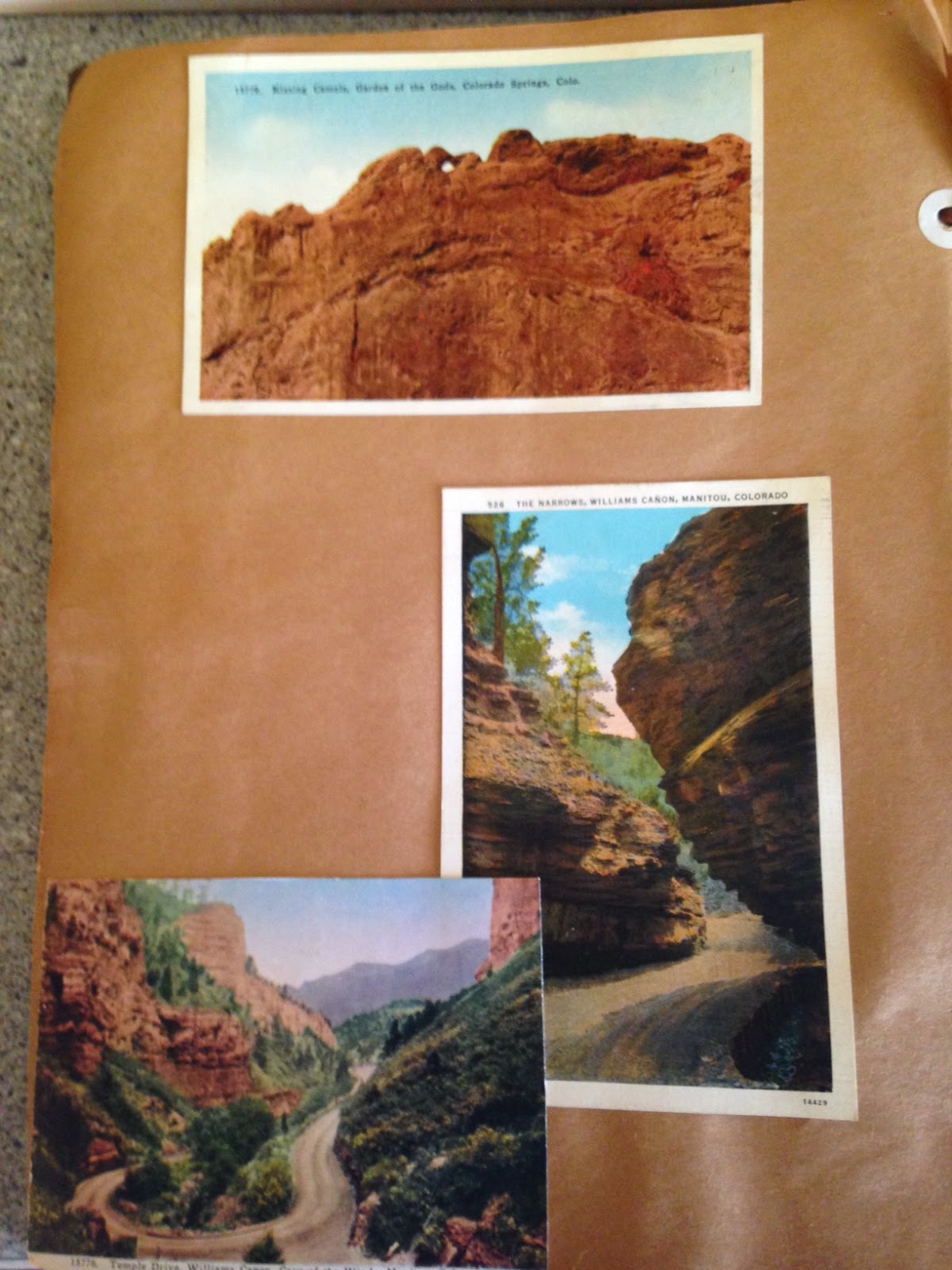 The two postcards below that take us into Williams Canyon in Manitou, Colorado. Manitou is also home to Cave of the Winds, which we'll get to in Part 6.

One cool thing inserted into the scrapbook is a copy of The Pike's Peak Daily News, "Official Newspaper" of the "Manitou and Pikes Peak Railway." What I love about it is all of the ads inside for different lodges, restaurants and nite clubs in the area. Here's a sampling (with my notes on their fates in parenthesis):

The Shirley-Savoy Hotel in Denver - rates starting at $2 daily. (eventually razed in the 1960s)

Milt's Cafe and Bar (not sure, but there's now a Milt's Coffee Shop in the area)

Silver Shield Nite Club - "Dance on the Largest Cushioned Floor in the West." (no longer there)

Casa Motor Court (no longer there)

All-States Cottage Camp (no longer there)

Sundance Inn (may be now the Sundance Mountain Lodge?)

Woodbine Lodge (burned down in 1945, but now location of the Woodbine Ecology Center)

The Broadmoor Hotel (this has been there since 1871 and is still there!)

Oxford Hotel (been there since 1891 and is still there!)

Rodeo Cottage Court (no longer there)

Hughes Rotisserie (no longer there)

Columbine Inn (there's one in Estes, but not sure if it's the same one)

And there, in a section of the paper called "Arrivals at Pikes Peak" on June 20th, 1937, we find Joan and Marilyn Johnson from St. Paul.

I found this tidbit at www.explore-old-west-colorado.com:

"The Pikes Peak Daily News had a building that took names of passengers on their way up the mountain and by the time they were on their return trip, the paper had been published with their names in it."

The Pikes Peak Cog Railway still exists today and can be taken to the top of Pikes Peak.

The Johnsons saw a lot in Colorado, and we'll get to more, including Cave of the  Winds, more Pikes Peak and the Continental Divide in Part 6!