Colorado - Part 2, Cave of the Winds

It is the third week of June, 1937. Alden, Velma, Joan and Marilyn have made it to the Rockies in Colorado, having visited the State Capitol in Denver, the Garden of the  Gods and Glenwood Canyon. They're probably still acclimatizing to the mountain altitude. But it's still the first main leg of their journey, and excitement is at a high point.

There next stop in Colorado is Cave of the Winds. Here is also where we start to see the scrapbooker's commentary in her own handwriting. 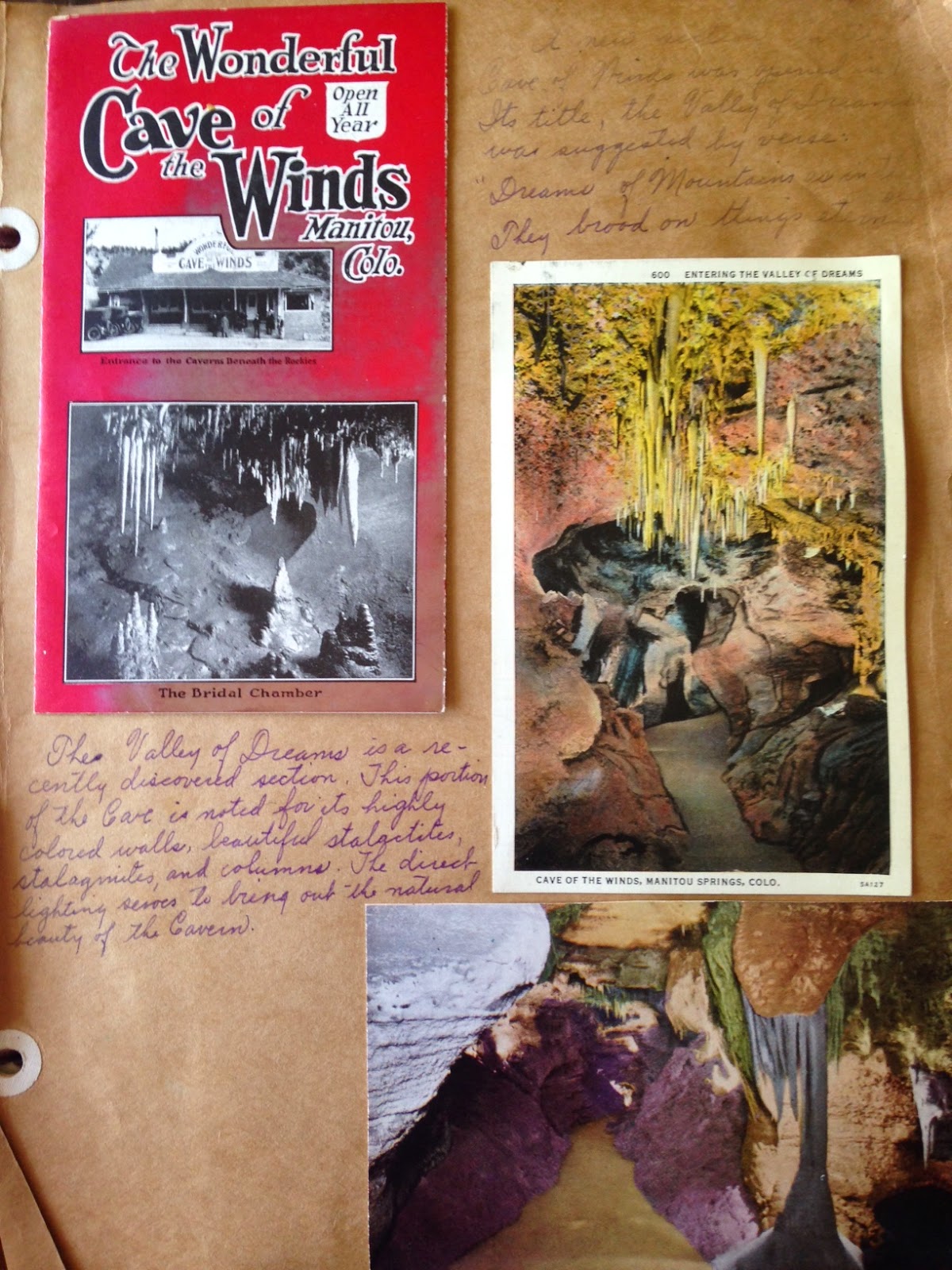 The Cave of the Winds brochure states "Nature through the ages of patient handiwork has furnished this mile of mysteries that see no day."

Underneath the brochure, the scrapbooker wrote "The Valley of Dreams is a recently discovered section. This portion of the cave is noted for its highly colored walls, beautiful stalactites, stalagmites and columns. The direct lighting serves to bring out the natural beauty of the cavern."

In the next column of the page is handwritten, "A new section in the Cave of the Winds was opened in 1935. Its title, The Valley of Dreams, was suggested by verse: 'Dreams of Mountains, as in their sleep they brood on things eternal.'"

That verse was inspired by the Grand Canyon, but I cannot find who wrote it. Sounds very Lovecraftian, though, doesn't it? 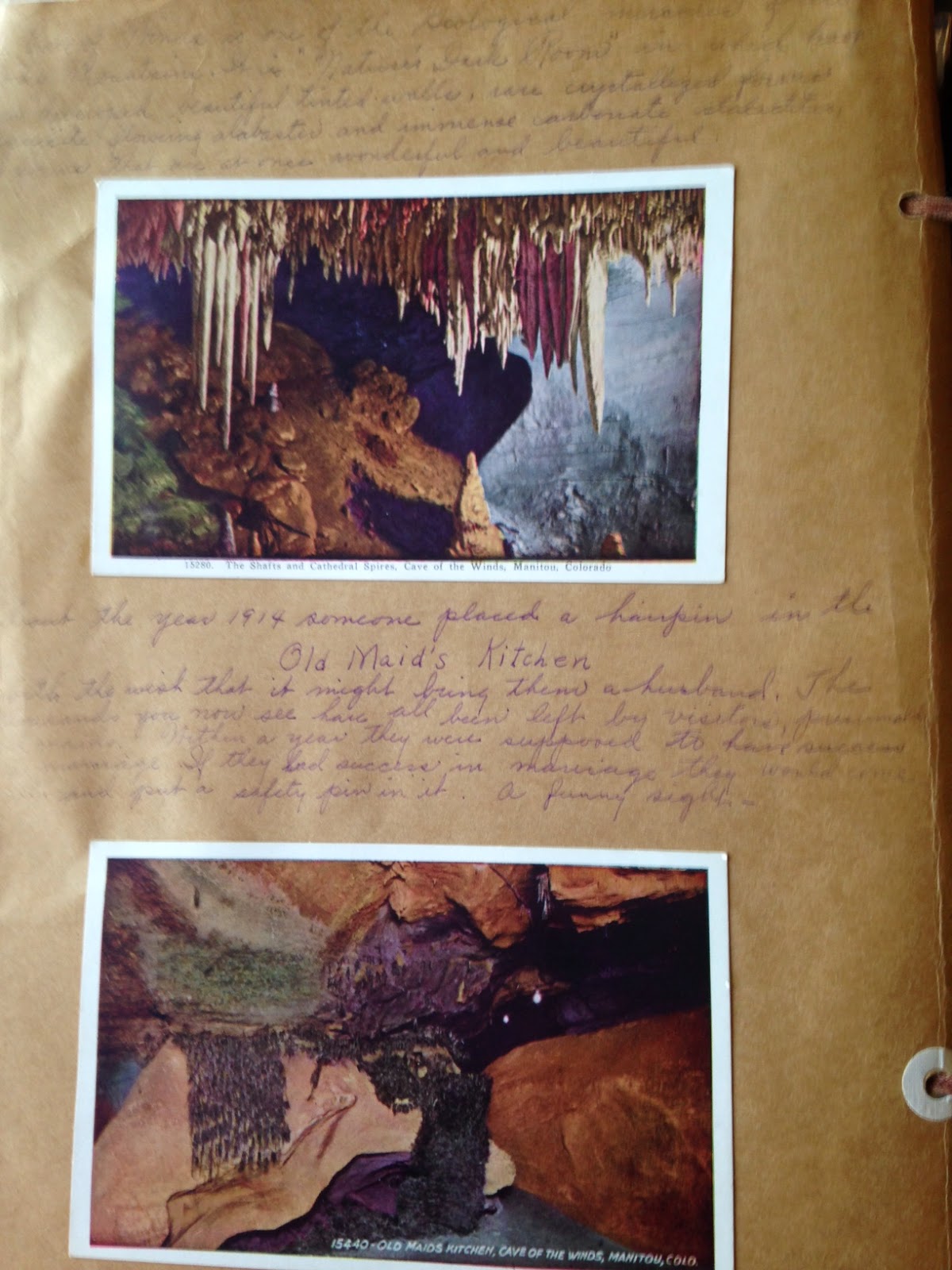 Handwritten on the top of the next page above a postcard titled "The Shafts and Cathedral Spires, Cave of the Winds, Manitou, Colorado" is "Cave of the Winds is one of the geological miracles of the Rocky Mountains. It is 'Nature's Dark Room' in which have developed beautiful tinted walls, rare crystallized forms of exquisite flowing alabaster and immense carbonate stalactites, all forms that are at once wonderful and beautiful."

It's hard to say whether the scribe in the Johnson family is cribbing this from other brochures or not. If not, she's quite a writer!

Over the next postcard, titled "Old Maids Kitchen, Cave of the Winds, Manitou, Colo" is handwritten, "About the year 1914 someone placed a hairpin in the Old Maid's Kitchen with the wish that it might bring them a husband. The thousands you now see have all been left by visitors, presumably old maids. Within a year they were supposed to have success in marriage. If they had success in marriage they would come back and put a safety pin in it. A funny sight."

It's hard to tell by the postcard above, but the dark patches that look almost like blankets are actually linked safety pins flowing over the rocks. I wonder if that tradition is still held to this day?

Next page of the scrapbook: 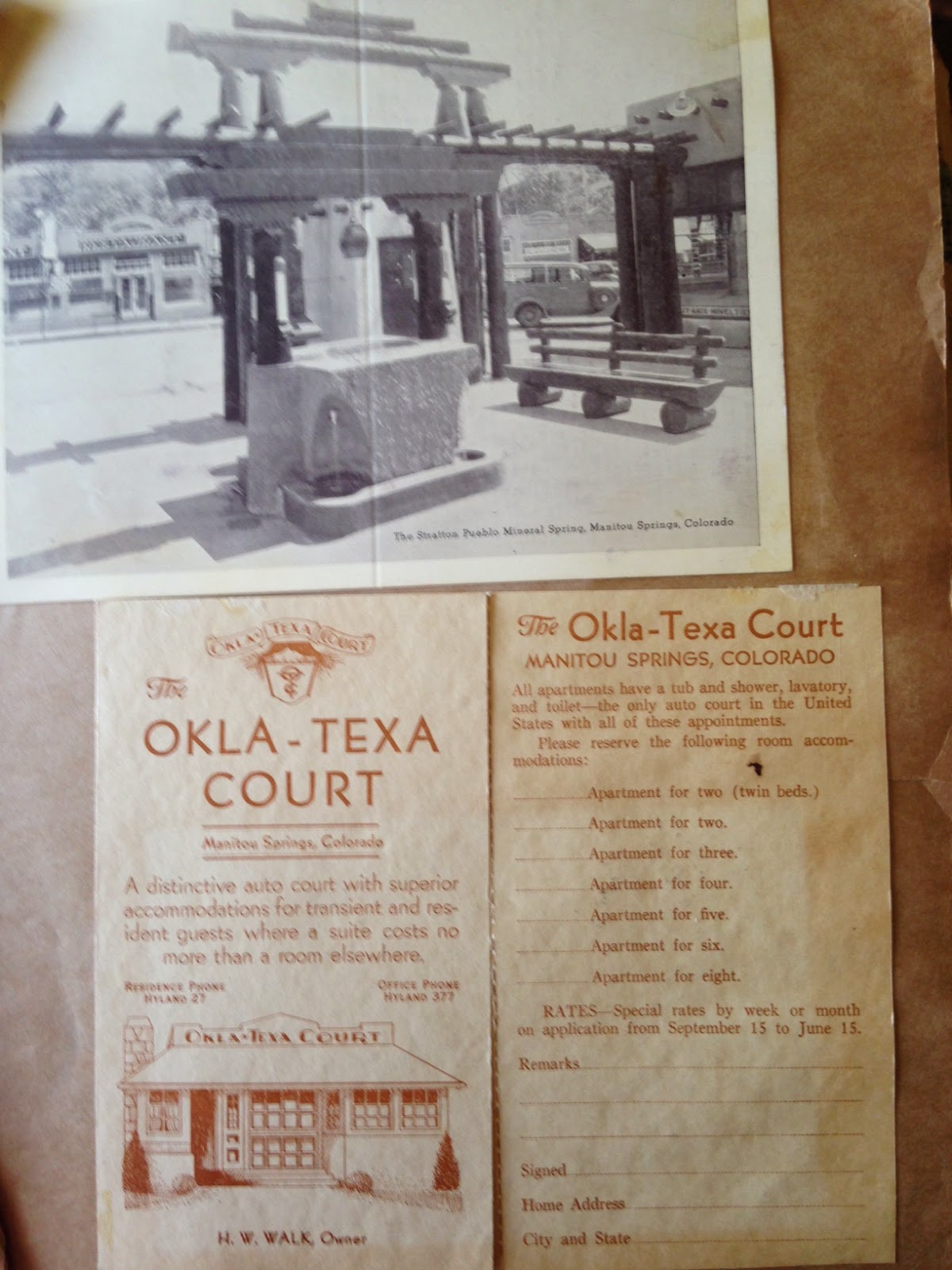 The top black and white photo is titled "The Stratton Pueblo Mineral Spring, Manitou Springs, Colorado." It is still there, looking much the same as it did back then.

Under that is the brochure for the Johnson's overnight accomodations at the Okla-Texa Court. Funny, since it is located in neither Oklahoma nor Texas. I don't believe this place still exists, but it gets a mention in an interesting article called Happy Trails via Westworld.com.

The next few pages of the scrapbook are still in Colorado, and we'll get to those in the next entry!

Email ThisBlogThis!Share to TwitterShare to FacebookShare to Pinterest
Labels: 1937 Scrapbook, Cave of the Winds, Colorado