The Johnsons have seen quite a lot on their road trip so far; Zion, Bryce Canyon, the Grand Canyon, Pike's Peak, Cave of the Winds...but they still have a long way to go!

From Zion National Park, Alden, Velma, Joan and Marilyn drove their LaSalle 427 miles, taking Hwy 91 through Utah, Vegas and part of California. At San Bernadino, they turned onto good 'ol Route 66 for a short jaunt that took them to Los Angeles. By the number of scrapbook pages dedicated to the area, it appears they did quite a lot there, so I'm breaking up their LA area visit into three parts (a,b,c). 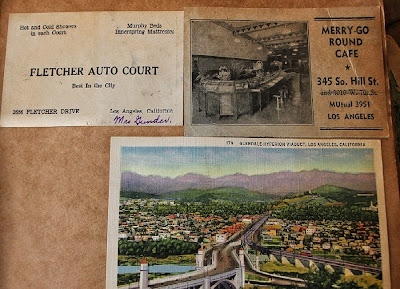 It looks like they stayed at the Fletcher Auto Court, 204 Fletcher Drive, Los Angeles. I Googled the auto court, and found scant mention of it, so I'm quite sure it no longer exists. I did find this interesting tidbit, however, dated April 28th, 1942:

Don't know for sure if it's the Fletcher of Fletcher Auto Court, but it sounds like it could be. It's interesting how they skirt around the whole 'affair' aspect of the situation. 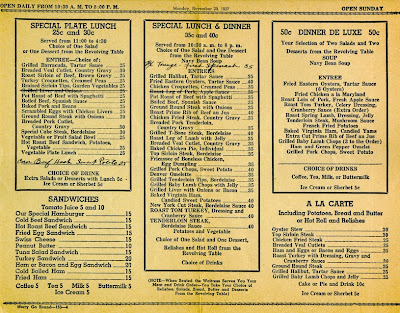 The postcard at the top of this page is of the Glendale Hyperion Viaduct. 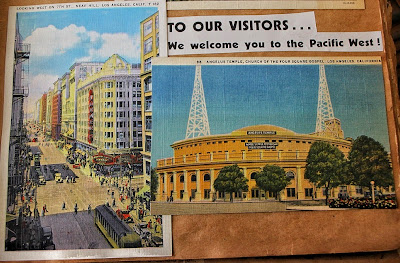 The Angelus Temple is still there, declared a National Historic Landmark in 1992. It was built in 1923, the "largest construction of its time in North America" according to Wikipedia. Its construction was overseen by Aimee Semple McPherson, who was still preaching there in 1937 when the Johnsons visited. Here's an autographed picture of her inside the scrapbook, though whether or not they received it in person, or purchased it from a gift shop is hard to say. Due to her inclusion in the scrapbook, I'm guessing they attended one of her services. 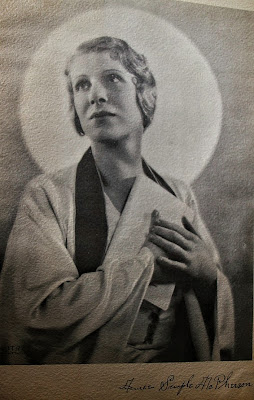 Aimee Semple McPherson was quite a character. Her Wikipedia page is long and makes for interesting reading. She was considered a faith healer, was purported to have affairs, suspected of faking her own kidnapping at one point, and died of a drug overdose in 1944. There have been novels written about her, movies made about her, musicals, plays...I recently read Sinclair Lewis's Elmer Gantry (highly recommended, by the way!) and just learned that one of the characters in the novel was based on McPherson.

Back to the scrapbook!

Though it's hard to see in the picture below, the date stamped on the Johnsons' DMV's Facts for Tourists is June 27, 1937. 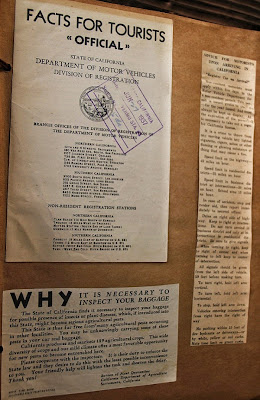 Despite some of the maudlin information I shared above, I'm guessing the Johnsons were having a grand old time. Mr. Fletcher was still alive and kicking, and Aimee Semple McPherson was still a giant media personality.

When mid-westerners head to Los Angeles, a big thing on their minds is often movie stars, and I don't think the Johnsons were any different. Here's a sheet in the scrapbook, double sided, with points of interest on one side (hand numbered and checked off by the Johnsons) and directions to celebrity homes on the other side: 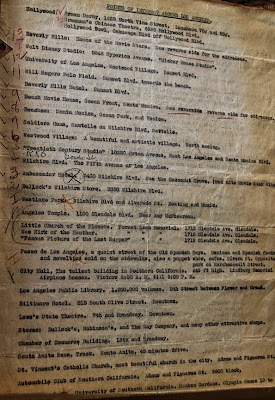 Hard to see here, but some of the celebrities include Will Rogers, Lionel Barrymore, Buster Keaton, Tom Mix, Chas. S. Chaplin (!) and Harold Lloyd. 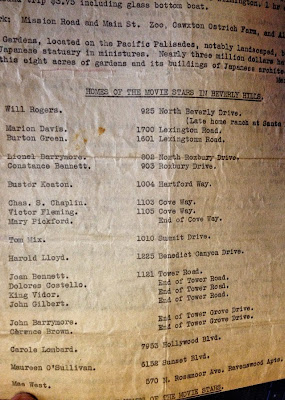 I wonder if they spotted any movie stars walking up and down a sidewalk on Rodeo Drive?

Next up is Los Angeles' Grauman's Chinese Theatre and the movies the Johnsons saw there!