The Johnsons are now in the home stretch, but there's still plenty of adventure left! According to the map at the beginning of the scrapbook, they left Yellowstone via Hwy 20 (which I believe is now the equivalent of Hwy 14) traveled through Cody to Greybull, then south to Worland.

There's a pamphlet for Thermopolis, WY in the scrapbook (see bottom picture) so they may have taken the 33 mile stretch south to visit, though it's not marked on their main map. Either way, they eventually took Hwy 16 east and north through the Bighorn Mountains. 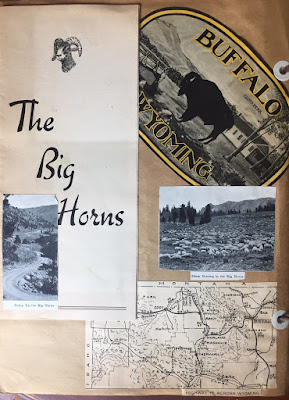 I've driven over the Bighorns a couple of times, and if it's your first time driving in Mountains, it can be a bit of a white-knuckled ride, especially back in 1937 when the roads weren't as nice as they are now. But it is a beautiful and breathtaking drive, so if yo have time, take that route instead of the faster, but not as awe-inspiring Interstate 90.

Below is the above Big Horns pamphlet opened up; 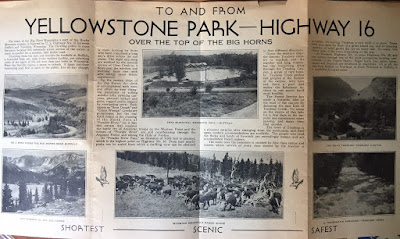 Close-up of the other little map on the above page; 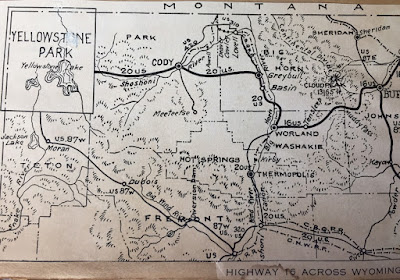 The black and white postcard on the scrapbook page below is captioned, "Hair Pin Turn - Ten Sleep Canyon on U.S. Highway 16, near Buffalo, Wyoming." 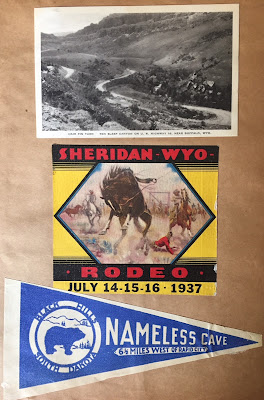 I wonder how the Johnson's LaSalle did travelling up and down the Big Horns and navigating the sharp turns and switchbacks. Did Joan and family ever have a flat tire? Run out of gas? Did anyone get sick on their journey? It's impossible to know all of the details, of course, but it's fun to imagine.

Anyway, after coming out of the Big Horns, our adventurous family drove through Buffalo, and then perhaps going to the Sheridan Rodeo advertised below. It was a bit out of the way of their drawn route, but not too far.

I love the vibrant colors of this old ad. 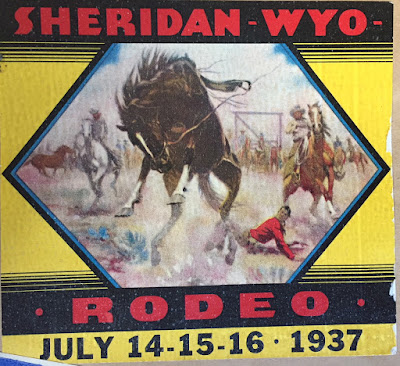 Whether or not they trekked up to Sheridan, they would have soon drive through Ucross, picking up Hwy 14, which took them north, east, and back south to Gillette, then east again past Devil's Tower. Hwy 14 soon took them into South Dakota, via Spearfish.

Nameless Cave (6-1/2 miles west of Rapid City!) is in the Black Hills, but is now privately owned, and no longer open to the public, dagnabbit! Luckily, if you go to the Black Hills today, there are many other great caves to tour.

The Thermopolis pamphlet as well as a National Service Bureau brochure showing points of interest in the Black Hills. It has a map on the back, as well as noting service stations located within the hills. 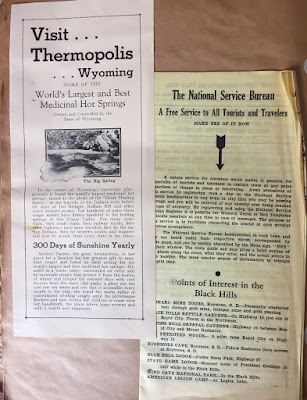 Next, the Johnsons spend more time in South Dakota. We will also see some more of Joan's artwork!